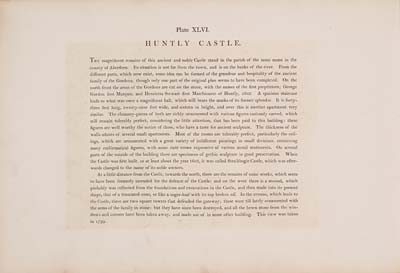 THE magnificent remains of this ancient and noble Castle stand in the parish of the same name in the
county of Aberdeen. Its situation is not far from the town, and is on the banks of the river. From the
different parts, which now exist, some idea can be formed of the grandeur and hospitality of the ancient
family of the Gordons, though only one part of the original plan seems to have been completed. On the
north front the arms of the Gordons are cut on the stone, with the names of the first proprietors; George
Gordon first Marquis, and Henrietta Stewart first Marchioness of Huntly, 1602. A spacious staircase
leads to what was once a magnificent hall, which still bears the marks of its former splendor. It is forty-
three feet long, twenty-nine feet wide, and sixteen in height, and over this is another apartment very
similar. The chimney-pieces of both are richly ornamented with various figures curiously carved, which
still remain tolerably perfect, considering the little attention, that has been paid to this building: these
figures are well worthy the notice of those, who have a taste for ancient sculpture. The thickness of the
walls admits of several small apartments. Most of the rooms are tolerably perfect, particularly the ceil-
ings, which are ornamented with a great variety of indifferent paintings in small divisions, containing
many emblematical figures, with some rude verses expressive of various moral sentiments. On several
parts of the outside of the building there are specimens of gothic sculpture in good preservation. When
the Castle was first built, or at least about the year 1602, it was called Strathbogie Castle, which was after-
wards changed to the name of its noble owners.

At a little distance from the Castle, towards the north, there are the remains of some works, which seem
to have been formerly intended for the defence of the Castle: and on the west there is a mound, which
probably was collected from the foundations and excavations in the Castle, and then made into its present
shape, that of a truncated cone, or like a sugar-loaf with its top broken off. In the avenue, which leads to
the Castle, there are two square towers that defended the gateway; these were till lately ornamented with
the arms of the family in stone: but they have since been destroyed, and all the hewn stone from the win-
dows and corners have been taken away, and made use of in some other building. This view was taken
in 1799.