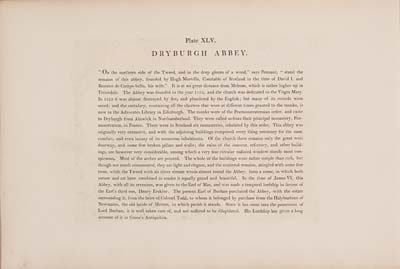 "ON the northern side of the Tweed, and in the deep gloom of a wood," says Pennant, "stand the
remains of this abbey, founded by Hugh Morville, Constable of Scotland in the time of David I. and
Beatrice de Campo bello, his wife." It is at no great distance from Melrose, which is rather higher up in
Tiviotdale. The Abbey was founded in the year 1152, and the church was dedicated to the Virgin Mary.
In 1323 it was almost destroyed by fire, and plundered by the English; but many of its records were
saved; and the cartulary, containing all the charters that were at different times granted to the monks, is
now in the Advocates Library in Edinburgh. The monks were of the Præmonstratensian order, and came
to Dryburgh from Alnwick in Northumberland. They were called so from their principal monastery, Præ-
monstratum, in France. There were in Scotland six monasteries, inhabited by this order. This abbey was
originally very extensive, and with the adjoining buildings comprised every thing necessary for the ease,
comfort, and even luxury of its numerous inhabitants. Of the church there remains only the great west
doorway, and some few broken pillars and walls; the ruins of the convent, refectory, and other build-
ings, are however very considerable, among which a very fine circular radiated window stands most con-
spicuous. Most of the arches are pointed. The whole of the buildings were rather simple than rich, but
though not much ornamented, they are light and elegant, and the scattered remains, mingled with some fine
trees, while the Tweed with its silver stream winds almost round the Abbey, form a scene, in which both
nature and art have combined to render it equally grand and beautiful. In the time of James VI, this
Abbey, with all its revenues, was given to the Earl of Mar, and was made a temporal lordship in favour of
the Earl's third son, Henry Erskine. The present Earl of Buchan purchased the Abbey, with the estate
surrounding it, from the heirs of Colonel Todd, to whom it belonged by purchase from the Halyburtons of
Newmains, the old lairds of Merton, in which parish it stands. Since it has come into the possession of
Lord Buchan, it is well taken care of, and not suffered to be dilapidated. His Lordship has given a long
account of it in Grose's Antiquities.