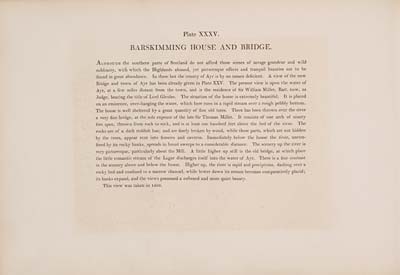 ALTHOUGH the southern parts of Scotland do not afford those scenes of savage grandeur and wild
sublimity, with which the Highlands abound, yet picturesque effects and tranquil beauties are to be
found in great abundance. In these last the county of Ayr is by no means deficient. A view of the new
Bridge and town of Ayr has been already given in Plate XXV. The present view is upon the water of
Ayr, at a few miles distant from the town, and is the residence of Sir William Miller, Bart. now, as
Judge, bearing the title of Lord Glenlee. The situation of the house is extremely beautiful. It is placed
on an eminence, over-hanging the water, which here runs in a rapid stream over a rough pebbly bottom.
The house is well sheltered by a great quantity of fine old trees. There has been thrown over the river
a very fine bridge, at the sole expence of the late Sir Thomas Miller. It consists of one arch of ninety
feet span, thrown from rock to rock, and is at least one hundred feet above the bed of the river. The
rocks are of a dark reddish hue, and are finely broken by wood, while those parts, which are not hidden
by the trees, appear rent into fissures and caverns. Immediately below the house the river, uncon-
fined by its rocky banks, spreads in broad sweeps to a considerable distance. The scenery up the river is
very picturesque, particularly about the Mill. A little higher up still is the old bridge, at which place
the little romantic stream of the Lugar discharges itself into the water of Ayr. There is a fine contrast
in the scenery above and below the house. Higher up, the river is rapid and precipitous, dashing over a
rocky bed and confined to a narrow channel, while lower down its stream becomes comparatively placid;
its banks expand, and the views possessed a softened and more quiet beauty.