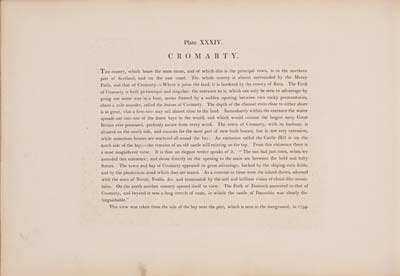 THE county, which bears the same name, and of which this is the principal town, is in the northern
part of Scotland, and on the east coast. The whole county is almost surrounded by the Moray
Firth, and that of Cromarty.—Where it joins the land, it is bordered by the county of Ross. The Firth
of Cromarty is both picturesque and singular: the entrance to it, which can only be seen to advantage by
going out some way in a boat, seems formed by a sudden opening between two rocky promontories,
about a mile asunder, called the Sutors of Cromarty. The depth of the channel even close to either shore
is so great, that a first-rate may sail almost close to the land. Immediately within the entrance the water
spreads out into one of the finest bays in the world, and which would contain the largest navy Great
Britain ever possessed, perfectly secure from every wind. The town of Cromarty, with its harbour, is
situated on the south side, and consists for the most part of new built houses, but is not very extensive,
while numerous houses are scattered all round the bay. An eminence called the Castle Hill is on the
north side of the bay,—the remains of an old castle still existing on the top. From this eminence there is
a most magnificent view. It is thus an elegant writer speaks of it. "The sun had just risen, when we
ascended this eminence; and shone directly on the opening to the main sea between the bold and lofty
Sutors. The town and bay of Cromarty appeared to great advantage, backed by the sloping corn fields,
and by the plantations amid which they are seated. As a contrast to these were the inland shores, adorned
with the seats of Novar, Foulis, &c. and terminated by the soft and brilliant vision of cloud-like moun-
tains. On the north another country opened itself to view. The Firth of Dornoch answered to that of
Cromarty, and beyond it was a long stretch of coast, in which the castle of Dunrobin was clearly dis-
tinguishable."

This view was taken from the side of the bay near the pier, which is seen in the foreground, in 1799.