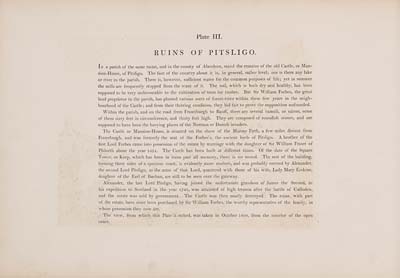 IN a parish of the same name, and in the county of Aberdeen, stand the remains of the old Castle, or Man-
sion-House, of Pitsligo. The face of the country about it is, in general, rather level; nor is there any lake
or river in the parish. There is, however, sufficient water for the common purposes of life; yet in summer
the mills are frequently stopped from the want of it. The soil, which is both dry and healthy, has been
supposed to be very unfavourable to the cultivation of trees for timber. But Sir William Forbes, the great
land proprietor in the parish, has planted various sorts of forest-trees within these few years in the neigh-
bourhood of the Castle; and from their thriving condition, they bid fair to prove the supposition unfounded.

Within the parish, and on the road from Fraserburgh to Banff, there are several tumuli, or cairns, some
of them sixty feet in circumference, and thirty feet high. They are composed of roundish stones, and are
supposed to have been the burying places of the Norman or Danish invaders.

The Castle or Mansion-House, is situated on the shore of the Murray Firth, a few miles distant from
Fraserburgh, and was formerly the seat of the Forbes's, the ancient lords of Pitsligo. A brother of the
first Lord Forbes came into possession of the estate by marriage with the daughter of Sir William Fraser of
Philorth about the year 1424. The Castle has been built at different times. Of the date of the Square
Tower, or Keep, which has been in ruins past all memory, there is no record. The rest of the building,
forming three sides of a spacious court, is evidently more modern, and was probably erected by Alexander,
the second Lord Pitsligo, as the arms of that Lord, quartered with those of his wife, Lady Mary Erskine,
daughter of the Earl of Buchan, are still to be seen over the gateway.

Alexander, the last Lord Pitsligo, having joined the unfortunate grandson of James the Second, in
his expedition to Scotland in the year 1745, was attainted of high treason after the battle of Culloden,
and the estate was sold by government. The Castle was then nearly destroyed. The ruins, with part
of the estate, have since been purchased by Sir William Forbes, the worthy representative of the family, in
whose possession they now are.

The view, from which this Plate is etched, was taken in October 1800, from the interior of the open
court.