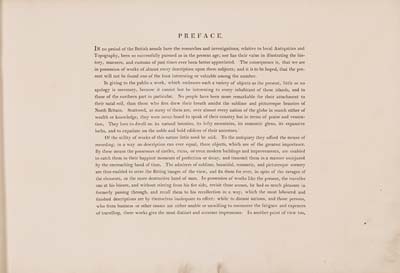 IN no period of the British annals have the researches and investigations, relative to local Antiquities and
Topography, been so successfully pursued as in the present age; nor has their value in illustrating the his-
tory, manners, and customs of past times ever been better appreciated. The consequence is, that we are
in possession of works of almost every description upon these subjects; and it is to be hoped, that the pre-
sent will not be found one of the least interesting or valuable among the number.

In giving to the public a work, which embraces such a variety of objects as the present, little or no
apology is necessary, because it cannot but be interesting to every inhabitant of these islands, and to
those of the northern part in particular. No people have been more remarkable for their attachment to
their natal soil, than those who first drew their breath amidst the sublime and picturesque beauties of
North Britain. Scattered, as many of them are, over almost every nation of the globe in search either of
wealth or knowledge, they were never heard to speak of their country but in terms of praise and venera-
tion. They love to dwell on its natural beauties, its lofty mountains, its romantic glens, its expansive
lochs, and to expatiate on the noble and bold edifices of their ancestors.

Of the utility of works of this nature little need be said. To the antiquary they afford the means of
recording, in a way no description can ever equal, those objects, which are of the greatest importance.
By these means the possessors of castles, ruins, or even modern buildings and improvements, are enabled
to catch them in their happiest moments of perfection or decay, and transmit them in a manner uninjured
by the encroaching hand of time. The admirers of sublime, beautiful, romantic, and picturesque scenery
are thus enabled to seize the flitting images of the view, and fix them for ever, in spite of the ravages of
the elements, or the more destructive hand of man. In possession of works like the present, the traveller
can at his leisure, and without stirring from his fire side, revisit those scenes, he had so much pleasure in
formerly passing through, and recall them to his recollection in a way, which the most laboured and
finished descriptions are by themselves inadequate to effect: while to distant nations, and those persons,
who from business or other causes are either unable or unwilling to encounter the fatigues and expences
of travelling, these works give the most distinct and accurate impressions. In another point of view too,