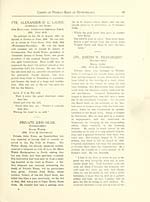 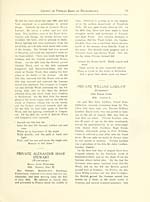 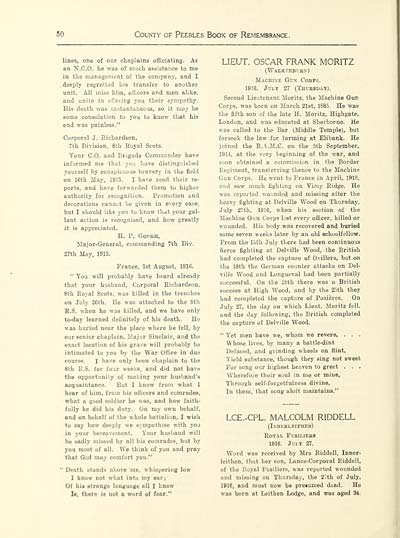 50
County of Peebles Book of Remembrance.
lines, one of our chaplains officiating. As
an N.C.O. he was of much assistance to me
in tlie management of the company, and I
.deeply regretted liis transfer to another
unit. All miss him, oIFicers and men alilve,
and unite in offering you their sympathy.
His death was instantaneous, so it may be
some consolation to you to know that his
end was painless."
Corporal J. Bichardson,
7th Division, 8th Royal Scots.
Your CO. and Brigade Commander have
informed me that you have distinguished
yourself by conspicuous bravery in the field
on 16th May, 1915. I have read their re-
ports, and have forwarded tliem to higher
authority for recognition. Promotion and
decorations cannot be given in every case,
but I should like you to know that your gal-
lant action is recognised, and how greatly
it is appreciated.
H. P. GOUGH,
;Major-Goneral, commanding 7th Div.
27th May, 1915.
France, 1st August, 1916.
" You will probably have heard already
that your husband. Corporal Richardson,
8th Royal Scots, was killed in the trenches
on July 26th. He was attached to the 9tli
R.S. when he was killed, and we have only
to-day learned definitely of his death. He
was buried near the place where he fell, by
our senior chaplain. Major Sinclair, and the
e.xact location of his grave will probably be
intimated to you by the War Office in due
course. I have only been chaplain to the
8th R.S. for four weeks, and did not have
the opportunity of raaldng your husband's
acquaintance. But I know from what I
hear of him, from liis officers and comrades,
what a good soldier he was, and how faith-
fully he did his duty. On my own behalf,
and on behalf of the whole battalion, I wish
to say how deeply we sympathise with you
in your bereavement. Your husband will
be sadly missed by all his comrades, but by
you most of all. We think of you and pray
that God may comfort you."
" Death stands above me, whispering low
I know not what into my ear;
Of his strange language all I know
Ifl, there is not a word of fear."
LIEUT. OSCAR FRANK MORITZ
(WALKEEBfEN)
Machine Gun Corps.
1916. July 27 (Thxjrsdat).
Second Lieutenant Moritz, the Machine Gun
Corps, was born on March 21st, 1885. He was
the fifth son of the late H. Moritz, Highgate,
London, and was educated at Sherborne. He
was called to the Bar (Middle Temple), but
forsook the law for farming at Elibank. He
joined the R.A.M.C. on the 5th September,
1914, at the very beginning of the war, and
soon obtained a commission in the Border
Regiment, translerring thence to the Machine
Gun Corps. He went to France in April, 191C,
and saw much fighting on Vimy Ridge. He
was reported wounded and missing after tiie
heavy fighting at Delville Wood on Thursday,
July 27th, 1916, when his section of the
Machine Gun Corps lost every officer, killed or
wounded. His body was recovered and buried
some seven weeks later by an old schoolfellow.
From the lath July there had been continuous
fierce fighting at Delville Wood, the British
had completed the capture of Ovillors, but on
the 18th the German counter attacks on Del-
ville Wood and Longueval had been partially
successful. On the 20th there was a British
success at High Wood, and by the 25th they
had completed the capture of Pozieres. On
July 27, the day on which Lieut. Moritz fell,
and the day following, tlie British completed
the capture of Delville Wood.
" Yet men have we, whom we revere, . . .
Whose lives, by many a battle-dint
Defaced, and grinding wheels on tlint,
Yield substance, though they sing not sweet
For song our highest heaven to greet . . .
Wherefore their soul in me or mine,
Through self-forgetfulness divine,
In them, that song aloft maintains."
LCE.-CPL. MALCOLM RIDDELL
(Innerleithen)
Royal Fusiliers
1916. Jui,Y 27.
Word was received by Mrs Riddell, Inner-
leithen, that lier son, Lance-Corporal L'iddoll,
of the Royal Fusiliers, was reported wounded
and missing on Thursday, the 27th of July,
1916, and must now be presumed dead. He
was born at Lcithen Lodge, and was aged 34.