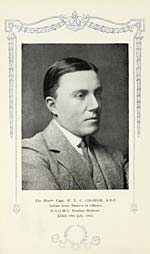 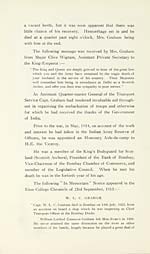 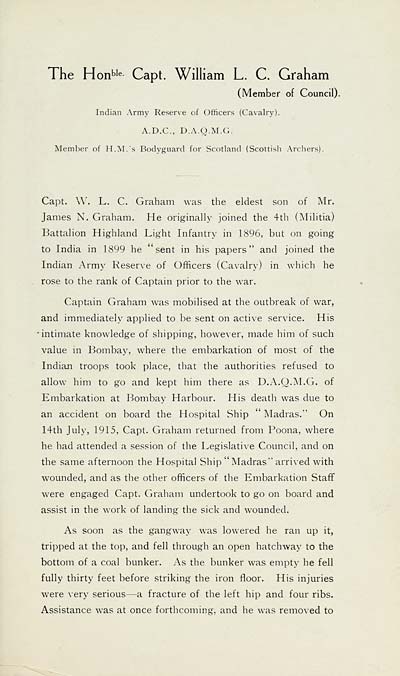 The Hon ble Capt. William L. C. Graham
(Member of Council).
Indian Army Reserve of Officers (Cavalry).
A.D.C., D.A.Q.M.G.
Member of H.M.'s Bodyguard for Scotland (Scottish Archers).
Capt. W. L. C. Graham was the eldest son of Mr.
James N. Graham. He originally joined the 4th (Militia)
Battalion Highland Light Infantry in 1896, but on going
to India in 1899 he "sent in his papers" and joined the
Indian Army Reserve of Officers (Cavalry) in which he
rose to the rank of Captain prior to the war.
Captain Graham was mobilised at the outbreak of war,
and immediately applied to be sent on active service. His
intimate knowledge of shipping, however, made him of such
value in Bombay, where the embarkation of most of the
Indian troops took place, that the authorities refused to
allow him to go and kept him there as D.A.Q.M.G. of
Embarkation at Bombay Harbour. His death was due to
an accident on board the Hospital Ship " Madras." On
14th July, 1915, Capt. Graham returned from Poona, where
he had attended a session of the Legislative Council, and on
the same afternoon the Hospital Ship "Madras" arrived with
wounded, and as the other officers of the Embarkation Staff
were engaged Capt. Graham undertook to go on board and
assist in the work of landing the sick and wounded.
As soon as the gangway was lowered he ran up it,
tripped at the top, and fell through an open hatchway to the
bottom of a coal bunker. As the bunker was empty he fell
fully thirty feet before striking the iron floor. His injuries
were very serious — a fracture of the left hip and four ribs.
Assistance was at once forthcoming, and he was removed to