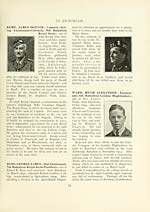 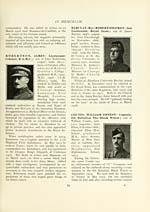 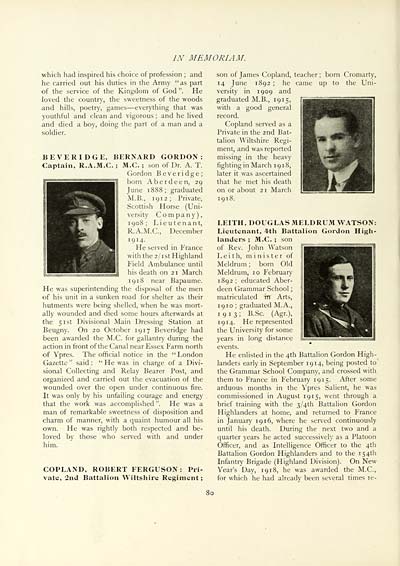 IN MEMORIAM.
which had inspired his choice of profession ; and
he carried out his duties in the Army "as part
of the service of the Kingdom of God ". He
loved the country, the sweetness of the woods
and hills, poetry, games — everything that was
youthful and clean and vigorous ; and he lived
and died a boy, doing the part of a man and a
soldier.
BEVERIDGE, BERNARD GORDON:
Captain, R.A.M.C. ; M.C. ; son of Dr. A. T.
Gordon Beveridge;
born Aberdeen, 29
June 1888; graduated
M.B., 1 91 2 ; Private,
Scottish Horse (Uni-
versity Company),
1908 ; Lieutenant,
R.A.M.C, December
1914.
He served in France
with the 2/ 1 st Highland
Field Ambulance until
his death on 2 1 March
19 18 near Bapaume.
He was superintending the disposal of the men
of his unit in a sunken road for shelter as their
hutments were being shelled, when he was mort-
ally wounded and died some hours afterwards at
the 51st Divisional Main Dressing Station at
Beugny. On 20 October 191 7 Beveridge had
been awarded the M.C. for gallantry during the
action in front of the Canal near Essex Farm north
of Ypres. The official notice in the "London
Gazette " said : " He was in charge of a Divi-
sional Collecting and Relay Bearer Post, and
organized and carried out the evacuation of the
wounded over the open under continuous fire.
It was only by his unfailing courage and energy
that the work was accomplished ". He was a
man of remarkable sweetness of disposition and
charm of manner, with a quaint humour all his
own. He was rightly both respected and be-
loved by those who served with and under
him.
COPLAND, ROBERT FERGUSON: Pri-
vate, 2nd Battalion Wiltshire Regiment ;
son of James Copland, teacher ; born Cromarty,
came up to the Uni-
14 June 1892 ; he
versity in 1909 and
graduated M.B., 1915,
with a good general
record.
Copland served as a
Private in the 2nd Bat-
talion Wiltshire Regi-
ment, and was reported
missing in the heavy
fighting in March 1918,
later it was ascertained
that he met his death
on or about 2 1 March
1918.
LEITH, DOUGLAS MELDRUM WATSON:
Lieutenant, 4th Battalion Gordon High-
landers ; M.C. ; son
of Rev. John Watson
L e i t h, minister of
Meldrum ; born Old
Meldrum, 10 February
1892 ; educated Aber-
deen Grammar School ;
matriculated m Arts,
1 9 10 ; graduated M.A.,
1 9 13; B.Sc. (Agr.),
1 9 14. He represented
the University for some
years in long distance
events.
He enlisted in the 4th Battalion Gordon High-
landers early in September 19 14, being posted to*
the Grammar School Company, and crossed with
them to France in February 1915. After some
arduous months in the Ypres Salient, he was
commissioned in August 1915, went through a
brief training with the 3/4th Battalion Gordon
Highlanders at home, and returned to France
in January 1916, where he served continuously
until his death. During the next two and a
quarter years he acted successively as a Platoon
Officer, and as Intelligence Officer to the 4th
Battalion Gordon Highlanders and to the 154th
Infantry Brigade (Highland Division). On New
Year's Day, 1918, he was awarded the M.C,
for which he had already been several times re-
80