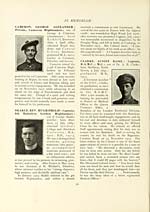 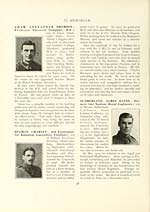 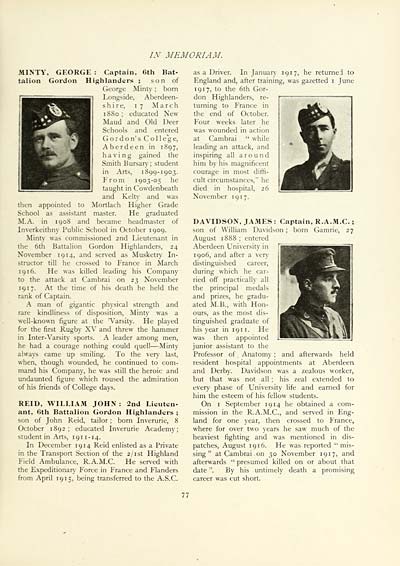 IN MEMORIAM.
MINTY, GEORGE : Captain, 6th Bat-
talion Gordon Highlanders ; son of
George Minty ; born
Longside, Aberdeen-
shire, 17 March
1880 ; educated New-
Maud and Old Deer
Schools and entered
Gordon's College,
Aberdeen in 1897,
having gained the
Smith Bursar}" ; student
in Arts, 1899-1903.
From 1903-05 he
taught in Cowdenbeath
and Kelty and was
then appointed to Mortlach Higher Grade
School as assistant master. He graduated
M.A. in 1908 and became headmaster of
Inverkeithny Public School in October 1909.
Minty was commissioned 2nd Lieutenant in
the 6th Battalion Gordon Highlanders, 24
November 19 14, and served as Musketry In-
structor till he crossed to France in March
1 91 6. He was killed leading his Company
to the attack at Cambrai on 23 November
19 1 7. At the time of his death he held the
rank of Captain.
A man of gigantic physical strength and
rare kindliness of disposition, Minty was a
well-known figure at the 'Varsity. He played
for the first Rugby XV and threw the hammer
in Inter-Varsity sports. A leader among men,
he had a courage nothing could quell — Minty
always came up smiling. To the very last,
when, though wounded, he continued to com-
mand his Company, he was still the heroic and
undaunted figure which roused the admiration
of his friends of College days.
REID, WILLIAM JOHN : 2nd Lieuten-
ant, 6th Battalion Gordon Highlanders ;
son of John Reid, tailor ; born Inverurie, 8
October 1892; educated Inverurie Academy;
student in Arts, 1911-14.
In December 19 14 Reid enlisted as a Private
in the Transport Section of the 2/ist Highland
Field Ambulance, R.A.M.C. He served with
the Expeditionary Force in France and Flanders
from April 1915, being transferred to the A.S.C.
as a Driver. In January 191 7, he returned to
England and, after training, was gazetted 1 June
1 91 7, to the 6th Gor-
don Highlanders, re-
turning to France in
the end of October.
Four weeks later he
was wounded in action
at Cambrai " while
leading an attack, and
inspiring all around
him by his magnificent
courage in most diffi-
cult circumstances," he
died in hospital, 26
November 19 17.
DAVIDSON, JAMES : Captain, R.A.M.C. ;
son of William Davidson ; born Gamrie, 2 7
August 1888 ; entered
Aberdeen University in
1906, and after a very
distinguished career,
during which he car-
ried off practically all
the principal medals
and prizes, he gradu-
ated M.B., with Hon-
ours, as the most dis-
tinguished graduate of
his year in 191 1. He
was then appointed
junior assistant to the
Professor of . Anatomy
resident hospital appointments at Aberdeen
and Derby. Davidson was a zealous worker,
but that was not all ; his zeal extended to
every phase of University life and earned for
him the esteem of his fellow students.
On 1 September 19 14 he obtained a com-
mission in the R.A.M.C, and served in Eng-
land for one year, then crossed to France,
where for over two years he saw much of the
heaviest fighting and was mentioned in dis-
patches, August 1916. He was reported "mis-
sing" at Cambrai. on 30 November 1917, and
afterwards " presumed killed on or about that
date ". By his untimely death a promising
career was cut short.
and afterwards held
77