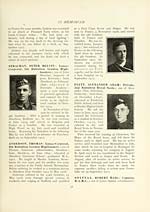 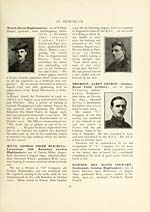 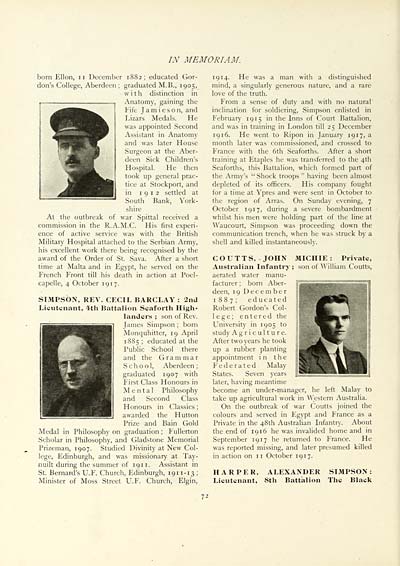 IN MEM OR! AM.
born Ellon, n December 1882; educated Gor-
don's College, Aberdeen ; graduated M.B., 1905,
with distinction in
Anatomy, gaining the
Fife J a m i e s o n, and
Lizars Medals. He
was appointed Second
Assistant in Anatomy
and was later House
Surgeon at the Aber-
deen Sick Children's
Hospital. He then
took up general prac-
tice at Stockport, and
in 1 9 1 2 settled at
South Bank, York-
shire
At the outbreak of war Spittal received a
commission in the R.A.M.C. His first experi-
ence of active service was with the British
Military Hospital attached to the Serbian Army,
his excellent work there being recognised by the
award of the Order of St. Sava. After a short
time at Malta and in Egypt, he served on the
French Front till his death in action at Poel-
capelle, 4 October 19 17.
SIMPSON, REV. CECIL BARCLAY : 2nd
Lieutenant, 4th Battalion Seaforth High-
landers ; son of Rev.
James Simpson ; born
Monquhitter, 19 April
1885 ; educated at the
Public School there
and the Grammar
School, Aberdeen ;
graduated 1907 with
First Class Honours in
Mental Philosophy
and Second Class
Honours in Classics ;
awarded the Hutton
Prize and Bain Gold
Medal in Philosophy on graduation ; Fullerton
Scholar in Philosophy, and Gladstone Memorial
Prizeman, 1907. Studied Divinity at New Col-
lege, Edinburgh, and was missionary at Tay-
nuilt during the summer of 191 1. Assistant in
St. Bernard's U.F. Church, Edinburgh, 1911-13 ;
Minister of Moss Street U.F. Church, Elgin,
1 9 14. He was a man with a distinguished
mind, a singularly generous nature, and a rare
love of the truth.
From a sense of duty and with no natural
inclination for soldiering, Simpson enlisted in
February 19 15 in the Inns of Court Battalion,
and was in training in London till 25 December
1916. He went to Ripon in January 1917, a
month later was commissioned, and crossed to
France with the 6th Seaforths. After a short
training at Etaples he was transferred to the 4th
Seaforths, this Battalion, which formed part of
the Army's " Shock troops " having been almost
depleted of its officers. His company fought
for a time at Ypres and were sent in October to
the region of Arras. On Sunday evening, 7
October 191 7, during a severe bombardment
whilst his men were holding part of the line at
Waucourt, Simpson was proceeding down the
communication trench, when he was struck by a
shell and killed instantaneously.
MICHIE: Private,
son of William Coutts,
COUTTS, JOHN
Australian Infantry
aerated water manu-
facturer ; born Aber-
deen, 19 December
1887; educated
Robert Gordon's Col-
lege; entered the
University in 1905 to
study Agriculture.
After two years he took
up a rubber planting
appointment in the
Federated Malay
States. Seven years
later, having meantime
become an under-manager, he left Malay to
take up agricultural work in Western Australia.
On the outbreak of war Coutts joined the
colours and served in Egypt and France as a
Private in the 48th Australian Infantry. About
the end of 191 6 he was invalided home and in
September 191 7 he returned to France. He
was reported missing, and later presumed killed
in action on n October 191 7.
HARPER, ALEXANDER SIMPSON:
Lieutenant, Sth Battalion The Black
72