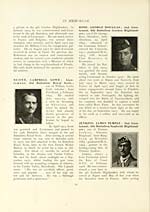 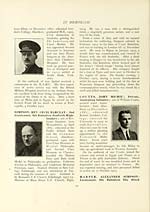 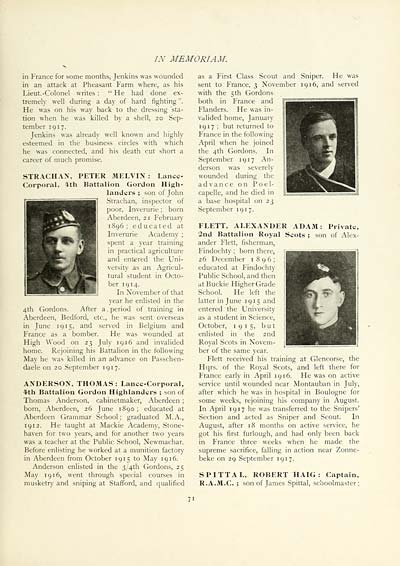 IN MEMORIAM.
in France for some months, Jenkins was wounded
in an attack at Pheasant Farm where, as his
Lieut. -Colonel writes : " He had done ex-
tremely well during a day of hard fighting ".
He was on his way back to the dressing "sta-
tion when he was killed by a shell, 20 Sep-
tember 191 7.
Jenkins was already well known and highly
esteemed in the business circles with which
he was connected, and his death cut short a
career of much promise.
STRACHAX, PETER MELVIN : Lance-
Corporal, 4th Battalion Gordon High-
landers ; son of John
Strachan, inspector of
poor, Inverurie ; born
Aberdeen, 21 February
1896 ; educated at
Inverurie Academy ;
spent a year training
in practical agriculture
and entered the Uni-
versity as an Agricul-
tural student in Octo-
ber 19 14.
In November of that
year he enlisted in the
4th Gordons. After a . period of training in
Aberdeen, Bedford, etc., he was sent overseas
in June 191 5, and served in Belgium and
France as a bomber. He was wounded at
High Wood on 23 July 19 16 and invalided
home. Rejoining his Battalion in the following
May he was killed in an advance on Passchen-
daele on 20 September 191 7.
ANDERSON, THOMAS : Lance-Corporal,
4th Battalion Gordon Highlanders ; son of
Thomas Anderson, cabinetmaker, Aberdeen ;
born, Aberdeen, 26 June 1890 ; educated at
Aberdeen Grammar School ; graduated M.A.,
191 2. He taught at Mackie Academy, Stone-
haven for two years, and for another two years
was a teacher at the Public School, Newmachar.
Before enlisting he worked at a munition factory
in Aberdeen from October 191 5 to May 19 16.
Anderson enlisted in the 3/4th Gordons, 25
May 1 916, went through special courses in
musketry and sniping at Stafford, and qualified
as a First Class Scout and Sniper. He was
sent to France, 3 November 19 16, and served
with the 5 th Gordons
both in France and
Flanders. He was in-
valided home, January
191 7 ; but returned to
France in the following
April when he joined
the 4th Gordons. In
September 19 17 An-
derson was severely
wounded during the
advance on P o e 1-
capelle, and he died in
a base hospital on 23
September 191 7.
FLETT, ALEXANDER ADAM: Private,
2nd Battalion Royal Scots ; son of Alex-
ander Flett, fisherman,
Findochty ; born there,
26 December 1896;
educated at Findochty
Public School, and then
at Buckie Higher Grade
School. He left the
latter in June 1915 and
entered the University
as a student in Science,
October, 1 9 1 5, but
enlisted in the 2nd
Royal Scots in Novem-
ber of the same year.
Flett received his training at Glencorse, the
Hqrs. of the Royal Scots, and left there for
France early in April 1916. He was on active
service until wounded near Montauban in July,
after which he was in hospital in Boulogne for
some weeks, rejoining his company in August.
In April 19 17 he was transferred to the Snipers'
Section and acted as Sniper and Scout. In
August, after 18 months on active service, he
got his first furlough, and had only been back
in France three weeks when he made the
supreme sacrifice, falling in action near Zonne-
beke on 29 September 191 7.
SPITTAL, ROBERT HAIG : Captain,
R.A.M.C. ; son of James Spittal, schoolmaster;
7 1