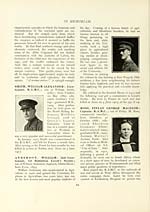 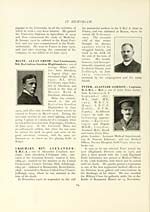 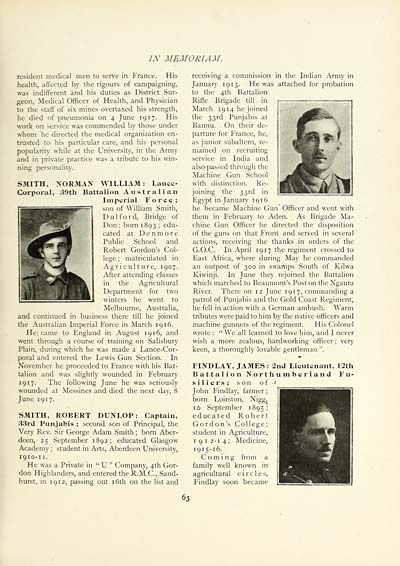 IN MEMORIAM.
resident medical men to serve in France. His
health, affected by the rigours of campaigning,
was indifferent and his duties as District Sur-
geon, Medical Officer of Health, and Physician
to the staff of six mines overtaxed his strength,
he died of pneumonia on 4 June 191 7. His
work on service was commended by those under
whom he directed the medical organization en-
trusted to his particular care, and his personal
popularity while at the University, in the Army
and in private practice was a tribute to his win-
ning personality.
SMITH, NORMAN WILLIAM: Lance-
Corporal, 39th Battalion Australian
Imperial Force;
son of William Smith,
Dulford, Bridge of
Don ; born 1893 ; edu-
cated at Denmore
Public School and
Robert Gordon's Col-
lege ; matriculated in
Agriculture, 1907.
After attending classes
in the Agricultural
Department for two
winters he went to
Melbourne, Australia,
and continued in business there till he joined
the Australian Imperial Force in March 19 16.
He; came to England in August 19 16, and
went through a course of training. on Salisbury
Plain, during which he was made a Lance-Cor-
poral and entered the Lewis Gun Section. In
November he proceeded to France with his Bat-
talion and was slightly wounded in February
191 7. The following June he was seriously
wounded at Messines and died the next day, 8
June 1917.
SMITH, ROBERT DUNLOP : Captain,
33rd Punjabis ; second son of Principal, the
Very Rev. Sir George Adam Smith ; born Aber-
deen, 25 September 1892 ; educated Glasgow
Academy ; student in Arts, Aberdeen University,
1910-n.
He was a Private in " U " Company, 4th Gor-
don Highlanders, and entered the R.M.C., Sand-
hurst, in 191 2, passing out 16th on the list and
receiving a commission in the Indian Army in
January 19 13. He was attached for probation
to the 4th Battalion
Rifle Brigade till in
March 19 14 he joined
the 33rd Punjabis at
Bannu. On their de-
parture for France, he,
as junior subaltern, re-
mained on recruiting
service in India and
also passed through the
Machine Gun School
with distinction. Re-
joining the 33rd in
Egypt m January 1 9 1 6
he became Machine Gun ■ Officer and went with
them in February to Aden. As Brigade Ma-
chine Gun Officer he directed the disposition
of the guns on that Front and served in several
actions, receiving the thanks in orders of the
G.O.C. In April 191 7 the regiment crossed to
East Africa, where during May he commanded
an outpost of 300 in swamps South of Kilwa
Kiwinji. In June they rejoined the Battalion
which marched to Beaumont's Post on the Ngaura
River. There on 12 June 191 7, commanding a
patrol of Punjabis and the Gold Coast Regiment,
he fell in action with a German ambush. Warm
tributes were paid to him by the native officers and
machine gunners of the regiment. His Colonel
wrote : " We all learned to love him, and I never
wish a more zealous, hardworking "officer ; very
keen, a thoroughly lovable gentleman ".
FINDLAY, JAMES : 2nd Lieutenant,
Battalion Northumberland
siliers; son of--)
John Findlay, farmer ;
born Loirston, Nigg ;
10 September 1895 ;
educated Robert
Gordon's College;
student in Agriculture,
1 9 1 2-1 4 ; Medicine,
1915-16.
C o m i n g from a
family well known in
agricultural circles,
Findlay soon became
12th
Fu-
63