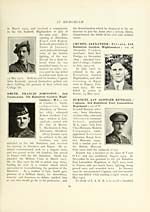 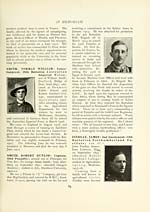 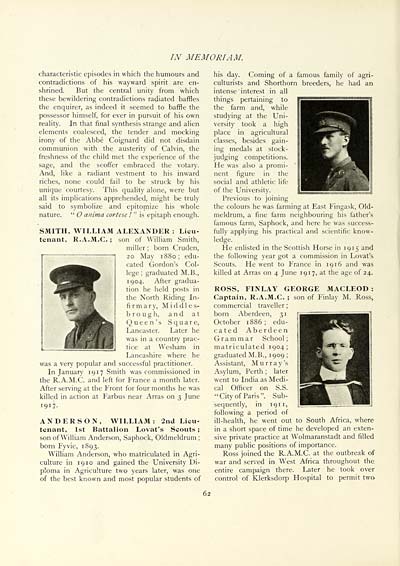 IN MEMORIAM.
characteristic episodes in which the humours and
contradictions of his wayward spirit are en-
shrined. But the central unity from which
these bewildering contradictions radiated baffles
the enquirer, as indeed it seemed to baffle the
possessor himself, for ever in pursuit of his own
reality. In that final synthesis strange and alien
elements coalesced, the tender and mocking
irony of the Abbe Coignard did not disdain
communion with the austerity of Calvin, the
freshness of the child met the experience of the
sage, and the scoffer embraced the votary.
And, like a radiant vestment to his inward
riches, none could fail to be struck by his
unique courtesy. This quality alone, were but
all its implications apprehended, might be truly
said to symbolize and epitoniize his whole
nature. " O anima cortese ! " is epitaph enough.
SMITH, WILLIAM ALEXANDER : Lieu-
tenant, R.A.M.C. ; son of William Smith,
miller ; born Cruden,
20 May 1880 ; edu-
cated Gordon's Col-
lege ; graduated M.B.,
1904. After gradua-
tion he held posts in
the North Riding In-
firmary, Middles-
brough, and at
Queen's Square,
Lancaster. Later he
was in a country prac-
tice at Wesham in
Lancashire where he
was a very popular and successful practitioner.
In January 191 7 Smith was commissioned in
the R.A.M.C. and left for France a month later.
After serving at the Front for four months he was
killed in action at Farbus near Arras on 3 June
1917.
ANDERSON, WILLIAM: 2nd Lieu-
tenant, 1st Battalion Lovat's Scouts ;
son of William Anderson, Saphock, Oldmeldrum ;
born Fyvie, 1893.
William Anderson, who matriculated in Agri-
culture in 1 9 10 and gained the University Di-
ploma in Agriculture two years later, was one
of the best known and most popular students of
his day. Coming of a famous family of agri-
culturists and Shorthorn breeders, he had an
intense 'interest in all
things pertaining to
the farm and, while
studying at the Uni-
versity took a high
place in agricultural
classes, besides gain-
ing medals at stock-
judging competitions.
He was also a promi-
nent figure in the
social and athletic life
of the University.
Previous to joining
the colours he was farming at East Fingask, Old-
meldrum, a fine farm neighbouring his father's
famous farm, Saphock, and here he was success-
fully applying his practical and scientific know-
ledge.
He enlisted in the Scottish Horse in 191 5 and
the following year got a commission in Lovat's
Scouts. He went to France in 1916 and was
killed at Arras on 4 June 1917, at the age of 24.
ROSS, FINLAY GEORGE MACLEOD :
Captain, R.A.M.C. ; son of Finlay M. Ross,
commercial traveller ;
born Aberdeen, 3 1
October 1886 ; edu-
cated Aberdeen
Grammar School ;
matriculated 1904;
graduated M.B., 1 909 ;
Assistant, Murray's
Asylum, Perth ; later
went to India as Medi-
cal Officer on S.S.
" City of Paris ". Sub-
sequently, in 191 1,
following a period of
ill-health, he went out to South Africa, where
in a short space of time he developed an exten-
sive private practice at Wolmaranstadt and filled
many public positions of importance.
Ross joined the R.A.M.C. at the outbreak of
war and served in West Africa throughout the
entire campaign there. Later he took over
control of Klerksdorp Hospital to permit two
62