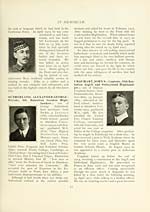 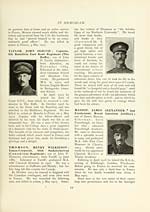 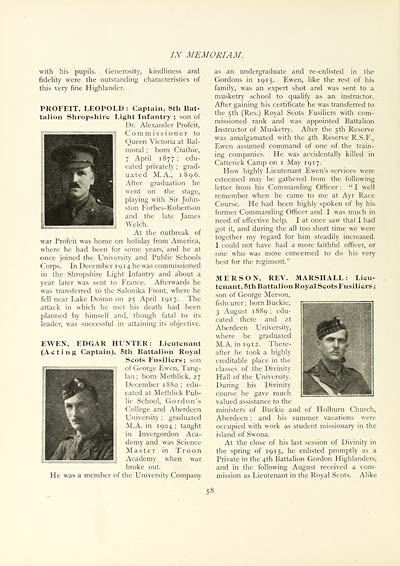 IN MEMORIAM.
with his pupils. Generosity, kindliness and
fidelity were the outstanding characteristics of
this very fine Highlander.
PROFEIT, LEOPOLD : Captain, 8th Bat-
talion Shropshire Light Infantry ; son of
Dr. Alexander Profeit,
Commissioner to
Queen Victoria at Bal-
moral ; born Crathie,
7 April 1877 ; edu-
cated privately ; grad-
uated M.A., 1896.
After graduation he
went on the stage,
playing with Sir John-
ston Forbes-Robertson
and the late James
y^^^""^^^^^^ _, Welch.
At the outbreak of
war Profeit was home on holiday from America,
where he had been for some years, and he at
once joined the University and Public Schools
Corps. In December 1 9 1 4 he was commissioned
in the Shropshire Light Infantry and about a
year later was sent to France. Afterwards he
was transferred to the Salonika Front, where he
fell near Lake Doiran on 25 April 1917. The
attack in which he met his death had been
planned by himself and, though fatal to its
leader, was successful in attaining its objective.
EWEN, EDGAR HUNTER: Lieutenant
(Acting Captain), 5th Battalion Royal
Scots Fusiliers; son
of George Ewen, Tang-
Ian ; born Methlick, 27
December 1880 ; edu-
cated at Methlick Pub-
lic School, Gordon's
College and Aberdeen
University ; graduated
M.A. in 1904 ; taught
in Invergordon Aca-
demy and was Science
Master in Troon
Academy when war
broke out.
He was a member of the University Company
as an undergraduate and re-enlisted in the
Gordons in 191 5. Ewen, like the rest of his
family, was an expert shot and was sent to a
musketry school to qualify as an instructor.
After gaining his certificate he was transferred to
the 5th (Res.) Royal Scots Fusiliers with com-
missioned rank and was appointed Battalion
Instructor of Musketry. After the 5th Reserve
was amalgamated with the 4th Reserve R.S.F.,
Ewen assumed command of one of the train-
ing companies. He was accidentally killed in
Catterick Camp on 1 May 191 7.
How highly Lieutenant Ewen's services were
esteemed may be gathered from the following
letter from his Commanding Officer : " I well
remember when he came to me at Ayr Race
Course. He had been highly spoken of by his
former Commanding Officer and I was much in
need of effective help. I at once saw that I had
got it, and during the all too short time we were
together my regard for him steadily increased.
I could not have had a more faithful officer, or
one who was more concerned to do his very
best for the regiment."
MERSON, REV. MARSHALL: Lieu-
tenant, 5th Battalion Royal Scots Fusiliers ;
son of George Merson,
fishcurer ; born Buckie,
3 August 1889 ; edu-
cated there and at
Aberdeen University,
where he graduated
M.A. in 191 2. There-
after he took a highly
creditable place in the
classes of the Divinity
Hall of the University.
During his Divinity
course he gave much
valued assistance to the
ministers of Buckie and of Holburn Church,
Aberdeen ; and his summer vacations were
occupied with work as student missionary in the
island of Swona.
At the close of his last session of Divinity in
the spring of 19 15, he enlisted promptly as a
Private in the 4th Battalion Gordon Highlanders,
and in the following August received a com-
mission as Lieutenant in the Royal Scots. Alike
58