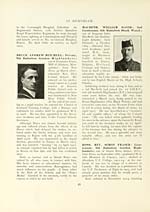 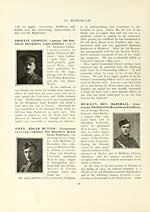 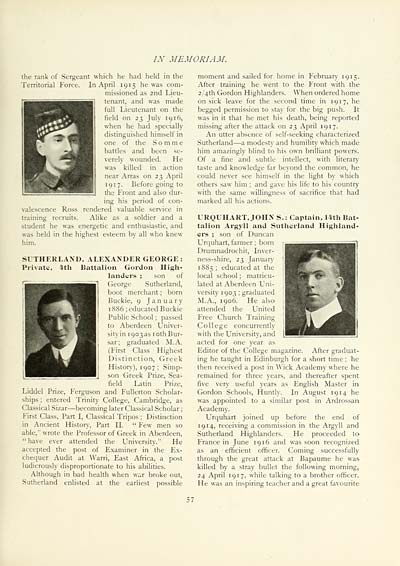 IN MEM OKI AM.
the rank of Sergeant which he had held in the
Territorial Force. In April 1 9 1 5 he was com-
missioned as 2nd Lieu-
tenant, and was made
full Lieutenant on the
field on 23 July 1916,
when he had specially
distinguished himself in
one of the Somme
battles and been se-
verely wounded. He
was killed in action
near Arras on 23 April
1917. Before going to
the Front and also dur-
ing his period of con-
valescence Ross rendered valuable service in
training recruits. Alike as a soldier and a
student he was energetic and enthusiastic, and
was held in the highest esteem by all who knew
him.
SUTHERLAND, ALEXANDER GEORGE :
Private, 4th Battalion Gordon High-
landers ; son of
George Sutherland,
boot merchant ; born
Buckie, 9 January
1886; educated Buckie
Public School ; passed
to Aberdeen Univer-
sity in i903as 10th Bur-
sar; graduated M.A.
(First Class Highest
Distinction, Greek
History), 1907 ; Simp-
son Greek Prize, Sea-
field Latin Prize,
Liddel Prize, Ferguson and Fullerton Scholar-
ships ; entered Trinity College, Cambridge, as
Classical Sizar— becoming later Classical Scholar ;
First Class, Part I, Classical Tripos ; Distinction
in Ancient History, Part II. " Few men so
able," wrote the Professor of Greek in Aberdeen,
"have ever attended the University." He
accepted the post of Examiner in the Ex-
chequer Audit at Warri, East Africa, a post
ludicrously disproportionate to his abilities.
Although in bad health when war broke out,
Sutherland enlisted at the earliest possible
moment and sailed for home in February 1915.
After training he went to the Front with the
2/4th Gordon Highlanders. When ordered home
on sick leave for the second time in 191 7, he
begged permission to stay for the big push. It
was in it that he met his death, being reported
missing after the attack on 23 April 191 7.
An utter absence of self-seeking characterized
Sutherland — a modesty and humility which made
him amazingly blind to his own brilliant powers.
Of a fine and subtle intellect, with literary
taste and knowledge far beyond the common, he
could never see himself in the light by which
others saw him ; and gave his life to his country
with the same willingness of sacrifice that had
marked all his actions.
URQUHART, JOHN S. : Captain, 14th Bat-
talion Argyll and Sutherland Highland-
ers ; son of Duncan
Urquhart, farmer ; born
Drumnadrochit, Inver-
ness-shire, 23 January
1885 ; educated at the
local school ; matricu-
lated at Aberdeen Uni-
versity 1903 ; graduated
M.A., 1906. He also
attended the United
Free Church Training
College concurrently
with the University, and
acted for one year as
Editor of the College magazine. After graduat-
ing he taught in Edinburgh for a short time ; he
then received a post in Wick Academy where he
remained for three years, and thereafter spent
five very useful years as English Master in
Gordon Schools, Huntly. In August 19 14 he
was appointed to a similar post in Ardrossan
Academy.
Urquhart joined up before the end of
19 14, receiving a commission in the Argyll and
Sutherland Highlanders. He proceeded to
France in June 191 6 and was soon recognized
as an efficient officer. Coming successfully
through the great attack at Bapaume he was
killed by a stray bullet the following morning,
24 April 191 7, while talking to a brother officer.
He was an inspiring teacher and a great favourite
57