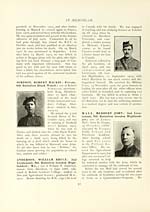 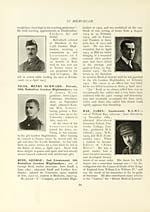 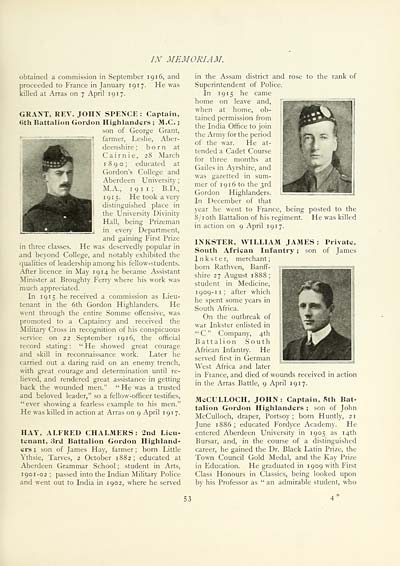 IN ME MORI AM.
obtained a commission in September 191 6, and
proceeded to France in January 191 7. He was
killed at Arras on 7 April 191 7.
GRANT, REV. JOHN SPENCE : Captain,
6th Battalion Gordon Highlanders ; M.C. ;
son of George Grant,
farmer, Leslie, Aber-
deenshire ; born at
Cairnie, 28 March
1890; educated at
Gordon's College and
Aberdeen University ;
M.A., 1911; B.D.,
1 9 1 5 . He took a very-
distinguished place in
the University Divinity
Hall, being Prizeman
in every Department,
and gaining First Prize
in three classes. He was deservedly popular in
and beyond College, and notably exhibited the
qualities of leadership among his fellow-students.
After licence in May 19 14 he became Assistant
Minister at Broughty Ferry where his work was
much appreciated.
In 1915 he received a commission as Lieu-
tenant in the 6th Gordon Highlanders. He
went through the entire Somme offensive, was
promoted to a Captaincy and received the
Military Cross in recognition of his conspicuous
service on 22 September 19 16, the official
record stating : " He showed great courage
and skill in reconnaissance work. Later he
carried out a daring raid on an enemy trench,
with great courage and determination until re-
lieved, and rendered great assistance in getting
back the wounded men." "He was a trusted
and beloved leader," so a fellow-officer testifies,
"ever showing a fearless example to his men."
He was killed in action at Arras on 9 April 191 7.
HAY, ALFRED CHALMERS: 2nd Lieu-
tenant, 3rd Battalion Gordon Highland-
ers ; son of James Hay, farmer ; born Little
Ythsie, Tarves, 2 October 1882 ; educated at
Aberdeen Grammar School ; student in Arts,
1901-02 ; passed into the Indian Military Police
and went out to India in 1902, where he served
in the Assam district and rose to the rank of
Superintendent of Police.
In 19 1 5 he came
home on leave and,
when at home, ob-
tained permission from
the India Office to join
the Army for the period
of the war. He at-
tended a Cadet Course
for three months at
Gailes in Ayrshire, and
was gazetted in sum-
mer of 19 16 to the 3rd
Gordon Highlanders.
In December of that
year he went to France, being posted to the
8/1 oth Battalion of his regiment. He was killed
in action on 9 April 191 7.
INKSTER, WILLIAM JAMES : Private,
South African Infantry ; son of James
Inkster, merchant;
born Rathven, Banff-
shire 27 August 1888 ;
student in Medicine,
1909-n; after which
he spent some years in
South Africa.
On the outbreak of
war Inkster enlisted in
" C " Company, 4th
Battalion South
African Infantry. He
served first in German
West Africa and later
in France, and died of wounds received in action
in the Arras Battle, 9 April 19 17.
McCULLOCH, JOHN : Captain, 5th Bat-
talion Gordon Highlanders ; son of John
McCulloch, draper, Portsoy; born Huntly, 21
June 1886 ; educated Fordyce Academy. He
entered Aberdeen University in 1905 as 14th
Bursar, and, in the course of a distinguished
career, he gained the Dr. Black Latin Prize, the
Town Council Gold Medal, and the Kay Prize
in Education. He graduated in 1909 with First
Class Honours in Classics, being looked upon
by his Professor as " an admirable student, who
53