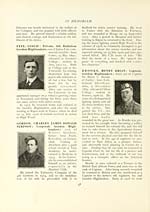 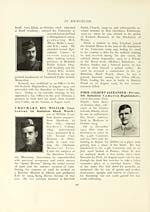 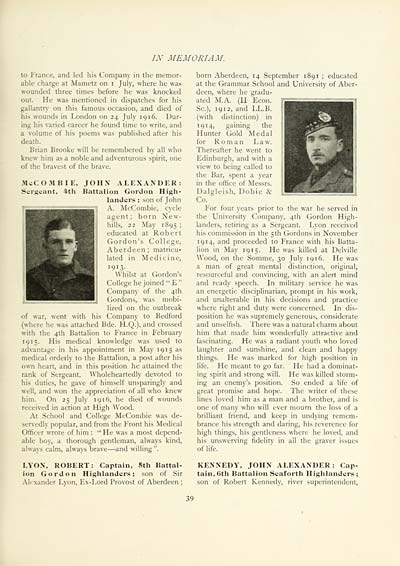 LV MEMO RI AM.
to France, and led his Company in the memor-
able charge at Mametz on i July, where he was
wounded three times before he was knocked
out. He was mentioned in dispatches for his
gallantry on this famous occasion, and died of
his wounds in London on 24 July 1916. Dur-
ing his varied career he found time to write, and
a volume of his poems was published after his
death.
Brian Brooke will be remembered by all who
knew him as a noble and adventurous spirit, one
of the bravest of the brave.
McC0 3IBIE, JOHN ALEXANDER:
Sergeant, 4th Battalion Gordon High-
landers ; son of John
A. McCombie, cycle
agent; born New-
hills, 22 May 1895 ;
educated at Robert
Gordon's College,
Aberdeen; matricu-
lated in Medicine,
Whilst at Gordon's
College he joined " E "
Company of the 4th
Gordons, was mobi-
lized on the outbreak
of war, went with his Company to Bedford
(where he was attached Bde. H.Q.), and crossed
with the 4th Battalion to France in February
1915. His medical knowledge was used to
advantage in his appointment in May 191 5 as
medical orderly to the Battalion, a post after his
own heart, and in this position he attained the
rank of Sergeant. Wholeheartedly devoted to
his duties, he gave of himself unsparingly and
well, and won the appreciation of all who knew
him. On 25 July 1916, he died of wounds
received in action at High Wood.
At School and College McCombie was de-
servedly popular, and from the Front his Medical
Officer wrote of him : " He was a most depend-
able boy, a thorough gentleman, always kind,
always calm, always brave — and willing ".
LYON, ROBERT: Captain, 5th Battal-
ion Gordon Highlanders; son of Sir
Alexander Lyon, Ex-Lord Provost of Aberdeen ;
born Aberdeen, 14 September 1891 ; educated
at the Grammar School and University of Aber-
deen, where he gradu-
ated M.A. (II Econ.
Sc), 1912, and LL.B.
(with distinction) in
1 9 14, gaining the
Hunter Gold Medal
for Roman La w.
Thereafter he went to
Edinburgh, and with a
view to being called to
the Bar, spent a year
in the office of Messrs.
Dalgleish, Dobie &
Co.
For four years prior to the war he served in
the University Company, 4th Gordon High-
landers, retiring as a Sergeant. Lyon received
his commission in the 5th Gordons in November
1 9 14, and proceeded to France with his Batta-
lion in May 19 15. He was killed at Delville
Wood, on the Somme, 30 July 19 16. He was
a man of great mental distinction, original,
resourceful and convincing, with an alert mind
and ready speech. In military service he was
an energetic disciplinarian, prompt in his work,
and unalterable in his decisions and practice
where right and duty were concerned. In dis-
position he was supremely generous, considerate
and unselfish. There was a natural charm about
him that made him wonderfully attractive and
fascinating. He was a radiant youth who loved
laughter and sunshine, and clean and happy
things. He was marked for high position in
life. He meant to go far. He had a dominat-
ing spirit and strong will. He was killed storm-
ing an enemy's position. So ended a life of
great promise and hope. The writer of these
lines loved him as a man and a brother, and is
one of many who will ever mourn the loss of a
brilliant friend, and keep in undying remem-
brance his strength and daring, his reverence for
high things, his gentleness where he loved, and
his unswerving fidelity in all the graver issues
of life.
KENNEDY, JOHN ALEXANDER: Cap-
tain, 6th Battalion Seaforth Highlanders ;
son of Robert Kennedy, river superintendent,
39