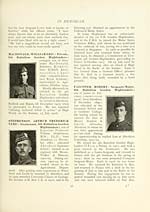 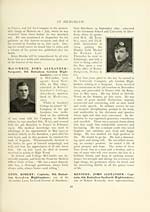 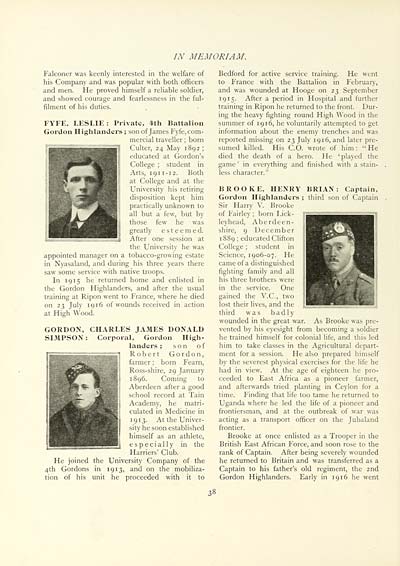 IN MEMORIAM.
Falconer was keenly interested in the welfare of
his Company and was popular with both officers
and men. He proved himself a reliable soldier,
and showed courage and fearlessness in the ful-
filment of his duties.
FYFE, LESLIE : Private, 4th Battalion
Gordon Highlanders ; son of James Fyfe, com-
mercial traveller ; born
Culter, 24 May 1892 ;
educated at Gordon's
College ; student in
Arts, 1911-12. Both
at College and at the
University his retiring
disposition kept him
practically unknown to
all but a few, but by
those few he was
greatly esteemed.
After one session at
the University he was
appointed manager on a tobacco-growing estate
in Nyasaland, and during his three years there
saw some service with native troops.
In 1 91 5 he returned home and enlisted in
the Gordon Highlanders, and after the usual
training at Ripon went to France, where he died
on 23 July 19 1 6 of wounds received in action
at High Wood.
GORDON, CHARLES JAMES DONALD
SIMPSON : Corporal, Gordon High-
landers ; son of
Robert Gordon,
farmer ; born Fearn,
Ross-shire, 29 January
1896. Coming to
Aberdeen after a good
school record at Tain
Academy, he matri-
culated in Medicine in
1 9 1 3. At the Univer-
sity he soon established
himself as an athlete,
especially in the
Harriers' Club.
He joined the University Company of the
4th Gordons in 1913, and on the mobiliza-
tion of his unit he proceeded with it to
Bedford for active service training. He went
to France with the Battalion in February,
and was wounded at Hooge on 23 September
19 15. After a period in Hospital and further
training in Ripon he returned to the front. Dur-
ing the heavy fighting round High Wood in the
summer of 19 16, he voluntarily attempted to get
information about the enemy trenches and was
reported missing on 23 July 191 6, and later pre-
sumed killed. His CO. wrote of him : " He
died the death of a hero. He 'played the
game ' in everything and finished with a stain-
less character."
BRIAN : Captain,
third son of Captain
BROOKE, HENRY
Gordon Highlanders
Sir Harry V. Brooke
of Fairley ; born Lick-
leyhead, Aberdeen-
shire, 9 December
1889 ; educated Clifton
College ; student in
Science, 1906-07. He
came of a distinguished
fighting family and all
his three brothers were
in the service. One
gained the V.C., two
lost their lives, and the
third was badly
wounded in the great war. As Brooke was pre-
vented by his eyesight from becoming a soldier
he trained himself for colonial life, and this led
him to take classes in the Agricultural depart-
ment for a session. He also prepared himself
by the severest physical exercises for the life he
had in view. At the age of eighteen he pro-
ceeded to East Africa as a pioneer farmer,
and afterwards tried planting in Ceylon for a
time. Finding that life too tame he returned to
Uganda where he led the life of a pioneer and
frontiersman, and at the outbreak of war was
acting as a transport officer on the Jubaland
frontier.
Brooke at once enlisted as a Trooper in the
British East African Force, and soon rose to the
rank of Captain. After being severely wounded
he returned to Britain and was transferred as a
Captain to his father's old regiment, the 2nd
Gordon Highlanders. Early in 1916 he went
38