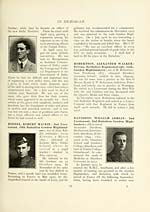 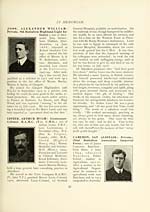 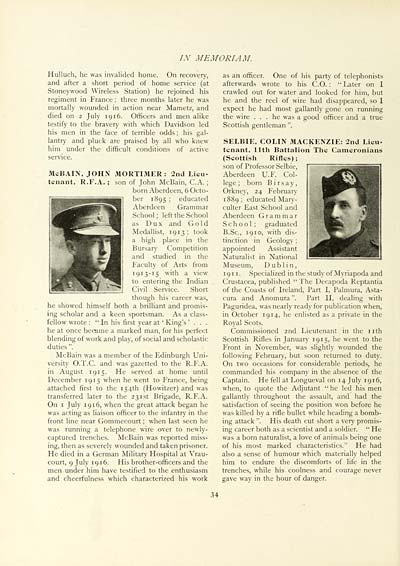 IN MEMORIAM.
Hulluch, he was invalided home. On recovery,
and after a short period of home service (at
Stoneywood Wireless Station) he rejoined his
regiment in France ; three months later he was
mortally wounded in action near Mametz, and
died on 2 July 19 16. Officers and men alike
testify to the bravery with which Davidson led
his men in the face of terrible odds ; his gal-
lantry and pluck are praised by all who knew
him under the difficult conditions of active
service.
McBAIN, JOHN MORTIMER : 2nd Lieu-
tenant, R.F.A. ; son of John McBain, C.A. ;
born Aberdeen, 6 Octo-
ber 1895 ; educated
Aberdeen Grammar
School ; left the School
as Dux and Gold
Medallist, 191 3 ; took
a high place in the
Bursary Competition
and studied in the
Faculty of Arts from
1 91 3-1 5 with a view
to entering the Indian
Civil Service. Short
though his career was,
he showed himself both a brilliant and promis-
ing scholar and a keen sportsman. As a class-
fellow wrote : " In his first year at ' King's ' . . .
he at once became a marked man, for his perfect
blending of work and play, of social and scholastic
duties ".
McBain was a member of the Edinburgh Uni-
versity O.T.C. and was gazetted to the R.F.A.
in August 1 91 5. He served at home until
December 19 15 when he went to France, being
attached first to the 154th (Howitzer) and was
transferred later to the 231st Brigade, R.F.A.
On 1 July 1916, when the great attack began he
was acting as liaison officer to the infantry in the
front line near Gommecourt ; when last seen he
was running a telephone wire over to newly-
captured trenches. McBain was reported miss-
ing, then as severely wounded and taken prisoner.
He died in a German Military Hospital at Vrau-
court, 9 July 19 16. His brother-officers and the
men. under him have testified to the enthusiasm
and cheerfulness which characterized his work
as an officer. One of his party of telephonists
afterwards wrote to his CO. : " Later on I
crawled out for water and looked for him, but
he and the reel of wire had disappeared, so I
expect he had most gallantly gone on running
the wire ... he was a good officer and a true
Scottish gentleman ".
SELBIE, COLIN MACKENZIE: 2nd Lieu-
tenant, 11th Battalion The Cameronians
(Scottish Rifles);
son of Professor Selbie,
Aberdeen U.F. Col-
lege ; born B i rsay ,
Orkney, 24 February
1889; educated Mary-
culter East School and
Aberdeen G r a m mar
School ; graduated
B.Sc, 1910, with dis-
tinction in Geology ;
appointed Assistant
Naturalist in National
Museum, Dublin,
1 9 1 1 . Specialized in the study of Myriapoda and
Crustacea, published "The Decapoda Reptantia
of the Coasts of Ireland, Part I, Palmura, Asta-
cura and Anomura ". Part II, dealing with
Paguridea, was nearly ready for publication when,
in October 19 14, he enlisted as a private in the
Royal Scots.
Commissioned 2nd Lieutenant in the nth
Scottish Rifles in January 1915, he went to the
Front in November, was slightly wounded the
following February, but soon returned to duty.
On two occasions for considerable periods, he
commanded his company in the absence of the
Captain. He fell at Longueval on 14 July 191 6,
when, to quote the Adjutant " he led his men
gallantly throughout the assault, and had the
satisfaction of seeing the position won before he
was killed by a rifle bullet while heading a bomb-
ing attack ". His death cut short a very promis-
ing career both as a scientist and a soldier. " He
was a born naturalist, a love of animals being one
of his most marked characteristics." He had
also a sense of humour which materially helped
him to endure the discomforts of life in the
trenches, while his coolness and courage never
gave way in the hour of danger.
34