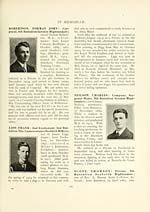 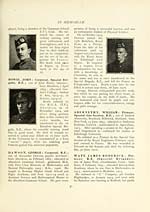 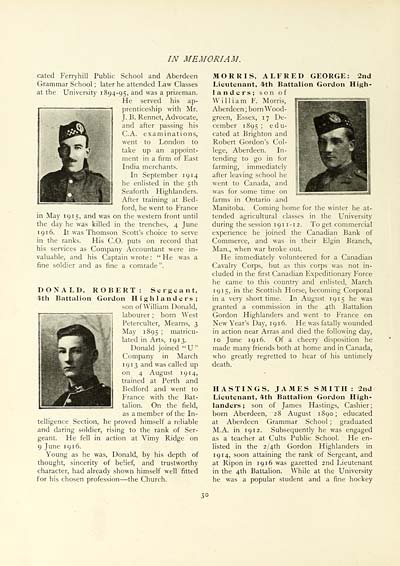 IN MEMORIAM.
cated Ferryhill Public School and Aberdeen
Grammar School ; later he attended Law Classes
at the University 1894-95, and was a prizeman.
He served his ap-
prenticeship with Mr.
J. B. Rennet, Advocate,
and after passing his
C.A. examinations,
went to London to
take up an appoint-
ment in a firm of East
India merchants.
In September 19 14
he enlisted in the 5th
Seaforth Highlanders.
After training at Bed-
ford, he went to France
in May 19 15, and was on the western front until
the day he was killed in the trenches, 4 June
19 16. It was Thomson Scott's choice to serve
in the ranks. His CO. puts on record that
his services as Company Accountant were in-
valuable, and his Captain wrote : " He was a
fine soldier and as fine a comrade ".
DONALD, ROBERT: Sergeant,
4th Battalion Gordon Highlanders ;
son of William Donald,
labourer ; born West
Peterculter, Mearns, 3
May 1895 ! matricu-
lated in Arts, 19 13.
Donald joined "U"
Company in March
19 1 3 and was called up
on 4 August 1 9 14,
trained at Perth and
Bedford and went to
France with the Bat-
talion. On the field,
as a member of the In-
telligence Section, he proved himself a reliable
and daring soldier, rising to the rank of Ser-
geant. He fell in action at Vimy Ridge on
9 June 191 6.
Young as he was, Donald, by his depth of
thought, sincerity of belief, and trustworthy
character, had already shown himself well fitted
for his chosen profession — the Church.
MORRIS, ALFRED GEORGE: 2nd
Lieutenant, 4th Battalion Gordon High-
landers; son of
William F. Morris,
Aberdeen ; born Wood-
green, Essex, 17 De-
cember 1895 ! edu-
cated at Brighton and
Robert Gordon's Col-
lege, Aberdeen. In-
tending to go in for
farming, immediately
after leaving school he
went to Canada, and
was for some time on
farms in Ontario and
Manitoba. Coming home for the winter he at-
tended agricultural classes in the University
during the session 1911-12. To get commercial
experience he joined the Canadian Bank of
Commerce, and was in their Elgin Branch,
Man., when war broke out.
He immediately volunteered for a Canadian
Cavalry Corps, but as this corps was not in-
cluded in the first Canadian Expeditionary Force
he came to this country and enlisted, March
1 91 5, in the Scottish Horse, becoming Corporal
in a very short time. In August 191 5 he was
granted a commission in the 4th Battalion
Gordon Highlanders and went to France on
New Year's Day, 191 6. He was fatally wounded
in action near Arras and died the following day,
10 June 191 6. Of a cheer) 7 disposition he
made many friends both at home and in Canada,
who greatly regretted to hear of his untimely
death.
HASTINGS, JAMES SMITH: 2nd
Lieutenant, 4th Battalion Gordon High-
landers ; son of James Hastings, Cashier;
born Aberdeen, 28 August 1890; educated
at Aberdeen Grammar School ; graduated
M.A. in 1912. Subsequently he was engaged
as a teacher at Cults Public School. He en-
listed in the 2/4th Gordon Highlanders in
19 14, soon attaining the rank of Sergeant, and
at Ripon in 19 16 was gazetted 2nd Lieutenant
in the 4th Battalion. While at the University
he was a popular student and a fine hockey
3°