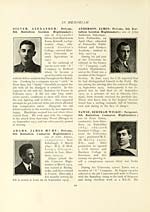 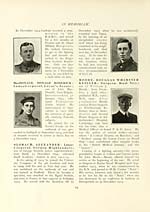 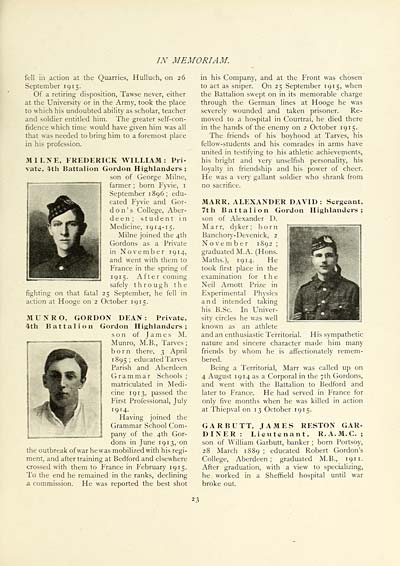 IN MEMORIAM.
fell in action at the Quarries, Hulluch, on 26
September 19 15.
Of a retiring disposition, Tawse never, either
at the University or in the Army, took the place
to which his undoubted ability as scholar, teacher
and soldier entitled him. The greater self-con-
fidence which time would have given him was all
that was needed to bring him to a foremost place
in his profession.
MILNE, FREDERICK WILLIAM: Pri-
vate, 4th Battalion Gordon Highlanders ;
son of George Milne,
farmer ; born Fyvie, 1
September 1896 ; edu-
cated Fyvie and Gor-
do n ' s College, Aber-
deen; student in
Medicine, 19 14-15.
Milne joined the 4th
Gordons as a Private
in November 1914,
and went with them to
France in the spring of
1915. After coming
safely through the
fighting on that fatal 25 September, he fell in
action at Ffooge on 2 October 1915.
MUNRO, GORDON DEAN: Private,
4th Battalion Gordon Highlanders;
son of James M.
Munro, M.B., Tarves ;
born there, 3 April
1895 ; educated Tarves
Parish and Aberdeen
Grammar Schools;
matriculated in Medi-
cine 19 1 3, passed the
First Professional, July
1914.
Having joined the
Grammar School Com-
pany of the 4th Gor-
dons in June 191 3, on
the outbreak of war he was mobilized with his regi-
ment, and after training at Bedford and elsewhere
crossed with them to France in February 191 5.
To the end he remained in the ranks, declining
a commission. He was reported the best shot
in his Company, and at the Front was chosen
to act as sniper. On 25 September 191 5, when
the Battalion swept on in its memorable charge
through the German lines at Hooge he was
severely wounded and taken prisoner. Re-
moved to a hospital in Courtrai, he died there
in the hands of the enemy on 2 October 191 5.
The friends of his boyhood at Tarves, his
fellow-students and his comrades in arms have
united in testifying to his athletic achievements,
his bright and very unselfish personality, his
loyalty in friendship and his power of cheer.
He was a very gallant soldier who shrank from
no sacrifice.
MARR, ALEXANDER DAVID : Sergeant,
7th Battalion Gordon Highlanders;
son of Alexander D.
M a r r, dyker ; born
Banchory-Devenick, 2
November 1892 ;
graduated M.A. (Hons.
Maths.), 1 9 14. He
took first place in the
examination for the
Neil Arnott Prize in
Experimental Physics
and intended taking
his B.Sc. In Univer-
sity circles he was well
known as an athlete
and an enthusiastic Territorial. His sympathetic
nature and sincere character made him many-
friends by whom he is affectionately remem-
bered.
Being a Territorial, Marr was called up on
4 August 1 9 14 as a Corporal in the 7 th Gordons,
and went with the Battalion to Bedford and
later to France. He had served in France for
only five months when he was killed in action
at Thiepval on 13 October 191 5.
GARBUTT, JAMES RESTON GAR-
DINER : Lieutenant, R.A.M.C. ;
son of William Garbutt, banker ; born Portsoy,
28 March 1889 ; educated Robert Gordon's
College, Aberdeen; graduated M.B., 191 1.
After graduation, with a view to specializing,
he worked in a Sheffield hospital until war
broke out.
23