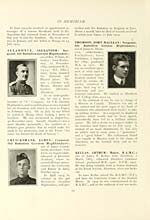 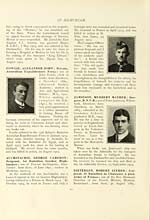 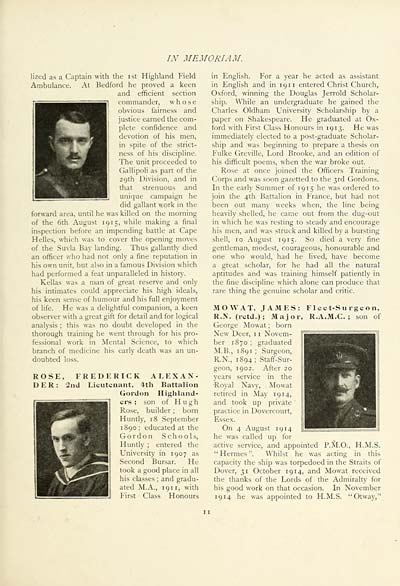 IN ME MORI AM.
lized as a Captain with the ist Highland Field
Ambulance. At Bedford he proved a keen
and efficient section
commander, whose
obvious fairness and
justice earned the com-
plete confidence and
devotion of his men,
in spite of the strict-
ness of his discipline.
The unit proceeded to
Gallipoli as part of the
29th Division, and in
that strenuous and
unique campaign he
did gallant work in the
forward area, until he was killed on the morning
of the 6th August 1915, while making a final
inspection before an impending battle at Cape
Helles, which was to cover the opening moves
of the Suvla Bay landing. Thus gallantly died
an officer who had not only a fine reputation in
his own unit, but also in a famous Division which
had performed a feat unparalleled in history.
Kellas was a man of great reserve and only
his intimates could appreciate his high ideals,
his keen sense of humour and his full enjoyment
of life. He was a delightful companion, a keen
observer with a great gift for detail and for logical
analysis ; this was no doubt developed in the
thorough training he went through for his pro-
fessional work in Mental Science, to which
branch of medicine his early death was an un-
doubted loss.
ROSE, FREDERICK ALEXAN-
DER: 2nd Lieutenant, 4th Battalion
Gordon Highland-
ers ; son of Hugh
Rose, builder ; born
Huntly, 18 September
1890 ; educated at the
Gordon Schools,
Huntly ; entered the
University in 1907 as
Second Bursar. He
took a good place in all
his classes ; and gradu-
ated M.A., 191 1, with
First Class Honours
in English. For a year he acted as assistant
in English and in 191 1 entered Christ Church,
Oxford, winning the Douglas Jerrold Scholar-
ship. While an undergraduate he gained the
Charles Oldham University Scholarship by a
paper on Shakespeare. He graduated at Ox-
ford with First Class Honours in 191 3. He was
immediately elected to a post-graduate Scholar-
ship and was beginning to prepare a thesis on
Fulke Greville, Lord Brooke, and an edition of
his difficult poems, when the war broke out.
Rose at once joined the Officers Training
Corps and was soon gazetted to the 3rd Gordons.
In the early Summer of 19 15 he was ordered to
join the 4th Battalion in France, but had not
been out many weeks when, the line being
heavily shelled, he came out from the dug-out
in which he was resting to steady and encourage
his men, and was struck and killed by a bursting
shell, 10 August 1 9 15. So died a very fine
gentleman, modest, courageous, honourable and
one who would, had he lived, have become
a great scholar, for he had all the natural
aptitudes and was training himself patiently in
the fine discipline which alone can produce that
rare thing the genuine scholar and critic.
MOWAT, JAMES: Fleet-Surgeon,
R.N. (retd.); Major, R.A.M.C. ; son of
George Mowat ; born
New Deer, 1 1 Novem-
ber 1870 ; graduated
M.B., 1 89 1 ; Surgeon,
R.N., 1894; Staff-Sur-
geon, 1902. After 20
years service in the
Royal Navy, Mowat
retired in May 19 14,
and took up private
practice in Dovercourt,
Essex.
On 4 August 19 14
he was called up for
active service, and appointed P.M.O., H.M.S.
" Hermes ". Whilst he was acting in this
capacity the ship was torpedoed in the Straits of
Dover, 31 October 19 14, and Mowat received
the thanks of the Lords of the Admiralty for
his good work on that occasion. In November
1914 he was appointed to H.M.S. "Otway,"
11