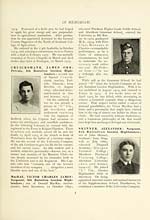 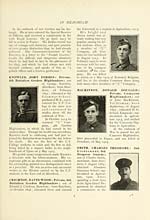 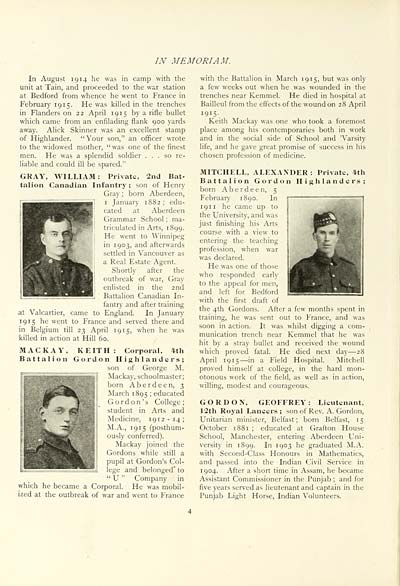 IN MEMORIAM.
In August 19 14 he was in camp with the
unit at Tain, and proceeded to the war station
at Bedford from whence he went to France in
February 19 15. He was killed in the trenches
in Flanders on 22 April 19 15 by a rifle bullet
which came from an enfilading flank 900 yards
away. Alick Skinner was an excellent stamp
of Highlander. "Your son," an officer wrote
to the widowed mother, "was one of the finest
men. He was a splendid soldier ... so re-
liable and could ill be spared."
GRAY, WILLIAM: Private, 2nd Bat-
talion Canadian Infantry ; son of Henry
Gray ; born Aberdeen,
1 January 1882; edu-
cated at Aberdeen
Grammar School ; ma-
triculated in Arts, 1899.
He went to Winnipeg
in 1903, and afterwards
settled in Vancouver as
a Real Estate Agent.
Shortly after the
outbreak of war, Gray
enlisted in the 2nd
Battalion Canadian In-
fantry and after training
at Valcartier, came to England. In January
1 9 15 he went to France and served there and
in Belgium till 23 April 1915, when he was
killed in action at Hill 60.
MACKAY, KEITH: Corporal, 4th
Battalion Gordon Highlanders;
son of George M.
Mackay, schoolmaster;
born Aberdeen, 3
March 1895 ; educated
Gordon's College;
student in Arts and
Medicine, 191 2 - 14 ;
M.A., 1915 (posthum-
ously conferred).
Mackay joined the
Gordons while still a
pupil at Gordon's Col-
lege and belonged* to
" U " Company in
which he became a Corporal. He was mobil-
ized at the outbreak of war and went to France
with the Battalion in March 1915, but was only
a few weeks out when he was wounded in the
trenches near Kemmel. He died in hospital at
Bailleul from the effects of the wound on 28 April
1915-.
Keith Mackay was one who took a foremost
place among his contemporaries both in work
and in the social side of School and 'Varsity
life, and he gave great promise of success in his
chosen profession of medicine.
MITCHELL, ALEXANDER: Private, 4th
Battalion Gordon Highlanders;
born Aberdeen, 5
February 1890. In
191 1 he came up to
the University, and was
just finishing his Arts
course with a view to
entering the teaching
profession, when war
was declared.
He was one of those
who responded early
to the appeal for men,
and left for Bedford
with the first draft of
the 4th Gordons. After a few months spent in
training, he was sent out to France, and was
soon in action. It was whilst digging a com-
munication trench near Kemmel that he was
hit by a stray bullet and received the wound
which proved fatal. He died next day — 28
April 1 91 5 — in a Field Hospital. Mitchell
proved himself at college, in the hard mon-
otonous work of the field, as well as in action,
willing, modest and courageous.
GORDON, GEOFFREY: Lieutenant,
12th Royal Lancers; son of Rev. A. Gordon,
Unitarian minister, Belfast; born Belfast, 15
October 1881 ; educated at Grafton House
School, Manchester, entering Aberdeen Uni-
versity in 1899. In 1903 he graduated M.A.
with Second-Class Honours in Mathematics,
and passed into the Indian Civil Service in
1904. After a short time in Assam, he became
Assistant Commissioner in the Punjab ; and for
five years served as lieutenant and captain in the
Punjab Light Horse, Indian Volunteers.