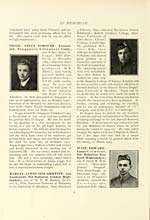 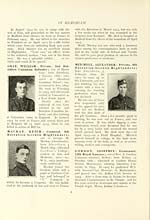 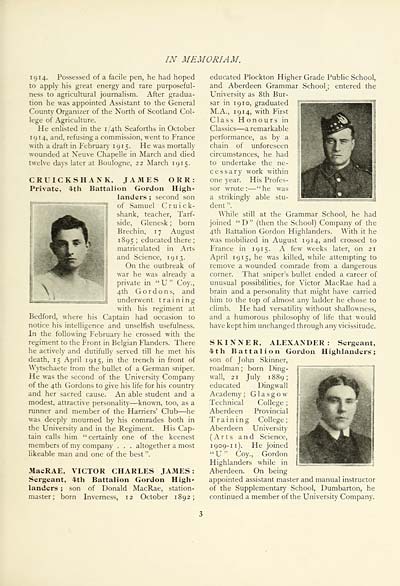 IN MEMORIAM.
1 9 14. Possessed of a facile pen, he had hoped
to apply his great energy and rare purposeful-
ness to agricultural journalism. After gradua-
tion he was appointed Assistant to the General
County Organizer of the North of Scotland Col-
lege of Agriculture.
He enlisted in the 1/4-th Seaforths in October
1914, and, refusing a commission, went to France
with a draft in February 19 15. He was mortally
wounded at Neuve Chapelle in March and died
twelve days later at Boulogne, 22 March 19 15.
CRUICKSHANK, JAMES ORR:
Private, 4th Battalion Gordon High-
landers ; second son
of Samuel C r u i c k-
shank, teacher, Tarf-
side, Glenesk ; born
Brechin, 17 August
1895 ; educated there;
matriculated in Arts
and Science, 19 13.
On the outbreak of
war he was already a
private in " U " Coy.,
4th Gordons, and
underwent training
with his regiment at
Bedford, where his Captain had occasion to
notice his intelligence and unselfish usefulness.
In the following February he crossed with the
regiment to the Front in Belgian Flanders. There
he actively and dutifully served till he met his
death, 15 April 1915, in the trench in front of
Wytschaete from the bullet of a German sniper.
He was the second of the University Company
of the 4th Gordons to give his life for his country
and her sacred cause. An able student and a
modest, attractive personality — known, too, as a
runner and member of the Harriers' Club — he
was deeply mourned by his comrades both in
the University and in the Regiment. His Cap-
tain calls him " certainly one of the keenest
members of my company . . . altogether a most
likeable man and one of the best ".
MacRAE, VICTOR CHARLES JAMES:
Sergeant, 4th Battalion Gordon High-
landers ; son of Donald MacRae, station-
master ; born Inverness, 12 October 1892;
educated Plockton Higher Grade Public School,
and Aberdeen Grammar School; entered the
University as 8th Bur-
sar in 1 9 10, graduated
M.A., 1 9 14, with First
Class Honours in
Classics — a remarkable
performance, as by a
chain of unforeseen
circumstances, he had
to undertake the ne-
cessary work within
one year. His Profes-
sor wrote : — " he was
a strikingly able stu-
dent ".
While still at the Grammar School, he had
joined "D" (then the School) Company of the
4th Battalion Gordon Highlanders. With it he
was mobilized in August 1914, and crossed to
France in 191 5. A few weeks later, on 21
April 1915, he was killed, while attempting to
remove a wounded comrade from a dangerous
corner. That sniper's bullet ended a career of
unusual possibilities, for Victor MacRae had a
brain and a personality that might have carried
him to the top of almost any ladder he chose to
climb. He had versatility without shallowness,
and a humorous philosophy of life that would
have kept him unchanged through any vicissitude.
SKINNER, ALEXANDER: Sergeant,
4th Battalion Gordon Highlanders';
son of John Skinner,
roadman ; born Ding-
wall, 21 July 1889 ;
educated Dingwall
Academy ; Glasgow
Technical College ;
Aberdeen Provincial
Training College;
Aberdeen University
(Arts and Science,
1909-n). He joined
" U " Coy., Gordon
Highlanders while in
Aberdeen. On being
appointed assistant master and manual instructor
of the Supplementary School, Dumbarton, he
continued a member of the University Company.