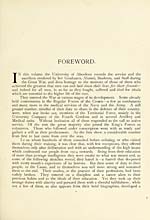 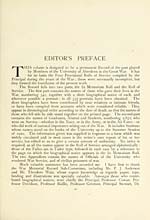 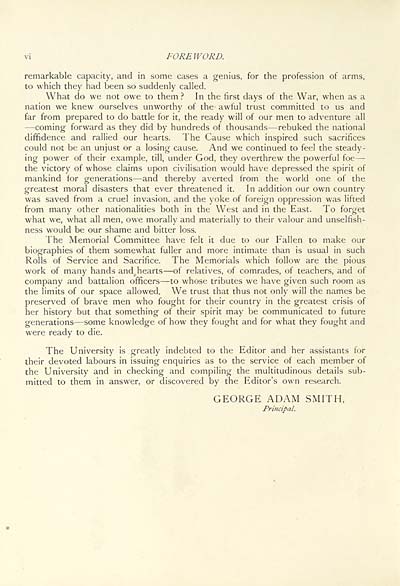 vi FORE WORD.
remarkable capacity, and in some cases a genius, for the profession of arms,
to which they had been so suddenly called.
What do we not owe to them ? In the first days of the War, when as a
nation we knew ourselves unworthy of the awful trust committed to us and
far from prepared to do battle for it, the ready will of our men to adventure all
— coming forward as they did by hundreds of thousands — rebuked the national
diffidence and rallied our hearts. The Cause which inspired such sacrifices
could not be an unjust or a losing cause. And we continued to feel the steady-
ing power of their example, till, under God, they overthrew the powerful foe —
the victory of whose claims upon civilisation would have depressed the spirit of
mankind for generations — and thereby averted from the world one of the
greatest moral disasters that ever threatened it. In addition our own country
was saved from a cruel invasion, and the yoke of foreign oppression was lifted
from many other nationalities both in the West and in the East. To forget
what we, what all men, owe morally and materially to their valour and unselfish-
ness would be our shame and bitter loss.
The Memorial Committee have felt it due to our Fallen to make our
biographies of them somewhat fuller and more intimate than is usual in such
Rolls of Service and Sacrifice. The Memorials which follow are the pious
work of many hands and ( hearts — of relatives, of comrades, of teachers, and of
company and battalion officers — to whose tributes we have given such room as
the limits of our space allowed. We trust that thus not only will the names be
preserved of brave men who fought for their country in the greatest crisis of
her history but that something of their spirit may be communicated to future
generations — some knowledge of how they fought and for what they fought and
were ready to die.
The University is greatly indebted to the Editor and her assistants for
their devoted labours in issuing enquiries as to the service of each member of
the University and in checking and compiling the multitudinous details sub-
mitted to them in answer, or discovered by the Editor's own research.
GEORGE ADAM SMITH,
Principal.