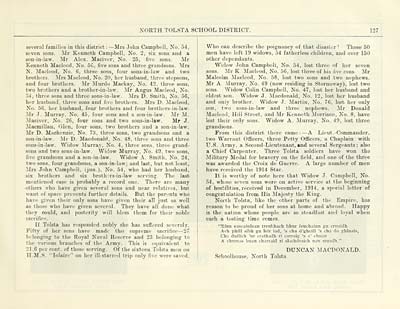 NORTH TOLSTA SCHOOL DISTRICT.
127
several families in this district : — Mrs John Campbell, No. 54,
seven sons. Mr Kenneth Campbell, No. 2, six sons and a
son-in-law. Mr Alex. Maciver, No. 25, five sons. Mr
Kenneth Macleod, No. 5C, five sons and three grandsons. Mrs
N. Macleod, No. 6, three sons, four sons-in-law and two
brothers. Mrs Macleod, No. 20, her husband, three stepsons,
and four brothers. Mr Murdo Mackay, No. 42, three sons,
two brothers and a brother-in-law. Mr Angus Macleod, No.
34, three sons and three sons-in-law. Mrs D. Smith, No. 56,
her husband, three sons and five brothers. Mrs D. Macleod,
No. 56, her husband, four brothers and four brothers-in-law-
Mr J. Murray, No. 45, four sons and a son-in-iaw. Mr M.
Maciver, No. 26, four sons and two sons-in-law. Mr J.
Macmillan, Glen, four sons, two brothers and a son-in-law.
Mr D. Mackenzie, No. 73, three sons, two grandsons and a
son-in-law. Mr D. Macdonald, No. 48, three sons and three
sons-in-law. Widow Murrav, No. 4, three sons, three grand-
•J ' 7 O
sons and two sons-in-law. Widow Murray, No. 49, two sons,
five grandsons and a son-in-law. Widow A. Smith, No. 24,
two sons, four grandsons, a son-in-law; and last, but not least,
Mrs John Campbell, (jun.), No. 54, who had her husband,
six brothers and six broth?rs-in-law serving. The last
mentioned case is probably a record one. There are many
others .vho have given several sons and near relatives, but
want of space prevents further details. But the parents who
have given their only sons have given their all just as well
as those who have given several. They have all done what
they could, and posterity will bless them for their noble
sacrifice.
If Tolsta has responded nobly she has suffered severely.
Fifty of her sons have made the supreme sacrifice — 27
belonging to the Royal Naval Reserve and 23 belonging to
the various branches of the Army. This is equivalent to
'21.6 per cent, of those serving. Of the sixteen Tolsta men on
H.M.S. "Iolaire" on her ill-starred trip only five were saved.
Who can describe the poignancy of that disaster ! These 50
men have left 19 widows, 54 fatherless children, and over 150
other dependants.
Widow John Campbeli, No. 54, lost three of her seven
sons. Mr K. Macleod, No. 56, lost three of his n.ve sons- Mr
Malcolm Macleod, No. 58, lost two sons and two nephews.
Mr A. Murray, No. 49 (now residing in Stornoway), lost two
sons. Widow Colin Campbell, No. 47, lost her husband and
eldest son. Widow J. Macdonald, No. 12, lost her husband
and oniy brother. Widow J. Martin, No. 76, lost her only
son, two sons-in-law and three nephews. Mr Donald
?vIacleod, Hill Street, and Mr Kenneth Morrison, No. 8, have
lost their only sons. Widow A. Murray, No. 49, lost three
grandsons.
From this district there came: — A Lieut. -Commander,
two Warrant Officers, three Petty Officers, a Chaplain with
U.S. Army, a Second-Lieutenant, and several Sergeants; also
a Chief Carpenter. Three Tolsta soldiers have won the
Military Medal for bravery on the field, and one of the three
was awarded the Croix de Guerre. A large number of men
have received the 1914 Star.
It is worthy of note here that Widow J. Campbell, No.
54, whose seven sons were on active service at the beginning
of hostilities, received in December, 1914, a special letter of
congratulation from His Majesty the King.
North Tolsta, like the other parts of the Empire, has
reason to be proud of her sons at home and abroad. Happy
is the nation whose people, are so steadfast and loyal when
such a testing time comes.
"Rinn eascairdean treubhach bhur feuchainn gu crnaidh
Ach phill sibh gu leir iad, 's cha d'gheill 's cha do ghluais,
Cho duilich 'ur crathadh ri carraig 's a' chnan
A chumas buan charraid ri slachdraich nan stnadh."
DUNCAN MACDONALD.
Schoolhouse, North Tolsta.