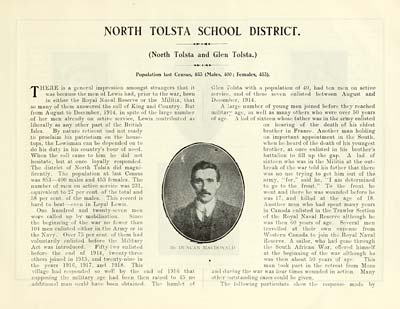 NORTH TOLSTA SCHOOL DISTRICT.
-»>-.-<*-
(North Tolsta and Glen Tolsta.)
Population last Census, 853 (Males, 400; Females, 453).
THERE is a general impression amongst strangers that it
was because the men of Lewis had, prior to the war, been
in either the Royal Naval Reserve or the Militia, that
so many of them answered the call of King and Country. But
from August to December, 1914, in spite of the large number
of her men already on active service, Lewis contributed as
liberally as any other part of the British
Isles. By nature reticent and not ready
to proclaim his patriotism on the house-
tops, the Lewisman can be depended on to
do his duty in his country's hour of need.
When the call came to him he did not
hesitate, but at once loyally responded.
The district of North Tolsta did magni-
ficently. The population at last Census
was 853 — 400 males and 453 females. The
number of men on active service was 231,
equivalent to 27 per cent, of the total and
58 per cent, of the males. This record is
hard to beat — even in Loyal Lewis.
One hundred and twenty-seven men
wesre called up by mobilisation. Since
the beginning of the war no fewer than
1 04 men enlisted either in the Army or in
the Navy. Over 75 per cent, of them had
voluntarily enlisted before the Military
Act was introduced. Fifty -two enlisted
before the end of 1914, twenty -three
others joined in 1915, and twenty-nine in
the years 1916, 1917, and 1918. This
village had responded so well by the end of 1916 that
supposing the military age had been then raised to 45 no
additional man could have been obtained. The hamlet of
Mr DUNCAN MACDONAi.D
Glen Tolsta with a population of 40, had ten men on active
service, and of these seven enlisted between August and
December, 1914.
A large number of young men joined before they reached
military age, as well as many others who were over 50 years
of age. A lad of sixteen whose father was in the army enlisted
on hearing of the death of his eldest
brother in France. Another man holding
an important appointment in the South,
when he heard of the death of his youngest
brother, at once enlisted in his brother's
battalion to fill up the gap. A lad of
sixteen who was in the Militia at the out-
break of the war told his father that there
was no use trying to get him out of the
army, "for," said he, "I am determined
to go to the front." To the front he
went and there he was wounded before he
was 17, and killed at the age of 18.
Another man who had spent many years
in Canada enlisted in the Trawler Section
of the Royal Naval Reserve although h-e
was then 60 years of age. Several men
travelled at their own expense from
Western Canada to join the Royal Naval
Reserve. A sailor, who had gone through
the South African War, offered himself
at the beginning of the war although he
was then about 50 years of age. This
man took part in the retreat from Mons
and during the war was four times wounded in action. Many
other outstanding cases could be given.
The following particulars show the response made by