(133) Photograph - Back School District -- Back, Vatisker, Lighthill and Coll 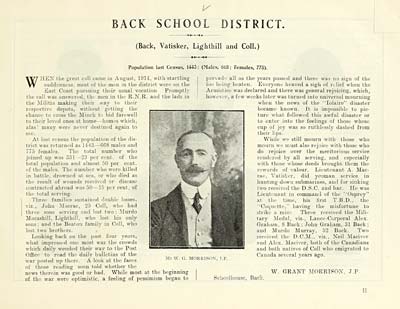 BACK SCHOOL DISTRICT.
(Back, Vatiskess Lighthili and Coll.)
Population last Census, 1443: (Males, 668; Females, 775).
WHEX the great call came iu August, 1914, with startling
suddenness, most of the men in the district were on the
East Coast pursuing their usual vocation Promptly
the call was answered, the men in the R.N.R. and the lads in
the Militia making their way to their
respective depots, without getting the
chance to cross the Minch to bid farewell
to their loved ones at home — homes which,
alas ! many were never destined again to
see.
At last census the population of the dis-
trict was returned as 1443 — 668 males and
775 females. The total number who
joined up was 331 — 23 per cent, of the
total population and almost 50 per cent,
of the males. The number who were killed
in battle, drowned at sea, or who died as
the result of wounds received or disease
contracted abroad was 50 — 15 per cent, of
the total serving.
Three families sustained double losses,
viz., John Macrae, 25 Coll, who had
three sons serving and lost two ; Murdo
Macaskill, Lighthill, who lost his only
sons ; and the Beaton family in Coll, who
lost two brothers.
Looking back on the past four years,
what impressed one most was the crowds
which daily wended their way to the Post
Office to read the daily bulletins of the
war posted up there. A look at the faces
of those reading soon told whether the
news therein was good or bad. While most at the beginning
of the war were optimistic, a feeling of pessimism began to
Mr W. G. MORRISON, J.P.
pervade all as the years passed and there was no sign of the
foe being beaten. Everyone heaved a sigh of relief when the
Armistice was declared and there was general rejoicing, which,
however, a few weeks later was turned into universal mourning
when the news of the "Iolaire" disaster
became known. It is impossible to pic-
ture what followed this awful disaster or
to enter into the feelings of those whose
cup of joy was so ruthlessly dashed from
their lips.
While we still mourn with those who
mourn we must also rejoice with those who
do rejoice over the meritorious service
rendered by all serving, and especially
with those whose deeds brought them the
rewards of valour. Lieutenant A. Mac-
rae, Vatisber, did yeoman service in
hunting down submarines, and for sinking-
two received the D.S.C. and bar. He was
Lieutenant in command of the '"Osprey"
at the time, his first T.B.D., the
"Coquette," having the misfortune to
strike a mine. Three received the Mili-
tary Medal, viz-, Lance-Corporal Alex.
Graham, 8 Back; John Graham, 31 Back:
and Murdo Murray, 52 Back. Two
received the D.C.M., viz., Neil Maciver
and Alex. Maciver, both of the Canadians
and both natives of Coll who emigrated to
Canada several years ago.
W. GRANT MORRISON, J.P.
Schoolhorise, Back.
H