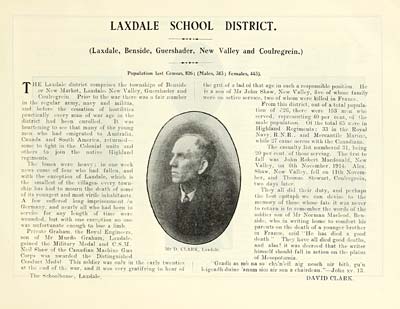 LAXDALE SCHOOL DISTRICT.
(Laxdale, Benside, Guershader, New Valley and Coulregrein.)
Population last Census, 826 ; (Males, 383 ; Females, 443).
THE Laxdale district comprises the townships of Benside
or New Market, Laxdale, New Valley, Guershader and
Coulregrein. Prior to the war there was a fair number
in the regular army, navy and militia,
and before the cessation of hostilities
practically every man of war age in the
district had been enrolled. It was
heartening to see that many of the young
men who had emigrated to Australia,
Canada and South America, returned —
some to fight in the Colonial units and
others to join the native Highland
regiments-
The losses were heavy ; in one week
news came of four who had fallen, and
with the exception of Laxdale, which is
the smallest of the villages, every town-
ship has had to mourn the death of some
of its youngest and most virile inhabitants.
A few suffered long imprisonment tin
Germany, and nearly all who had been in
service for any length of time were
wounded, but with one exception no one
was unfortunate enough to lose a limb.
Private Graham, the Royal Engineers,
son of Mr Murdo Graham, Laxdale.
gained the Military Meda,l and C.S.M.
Neil Shaw of the Canadian Machine Gun
Corps was awarded the Distinguished
Conduct Medn! This soldier was only in the early twenties
at the end of the war, and it was very gratifying to hear of
The Schooihouse, Laxdale.
Mr D. CLARK, Laxdale
the grit of a lad of that age in such a responsible position. He
is a son of Mr John Shaw, New Valley, five of whose family
were on active service, two of whom were killed in France.
From this district, out of a total popula-
tion of 326, there were 153 men who
served, representing 40 per cent, of the
male population. Of the total 65 were in
Highland Regiments; 33 in the Roval
Navy, R.N.R., and Mercantile Marine,
while 27 came across with the Canadians.
The casualty list numbered 31, being
20 per cent, of those serving. The first to
fall was John Robert Macdonald, New
Valley, on 6th November, 1914- Alex.
Shaw, New Valley, fell on 11th Novem-
ber, and Thomas Stewart, Coulregrein,
two days later.
They all did their duty, and perhaps
the best epitaph we can devise to the
memory of those whose fate it was never
to return is to remember the words of the
soldier son of Mr Norman Macleod, Ben-
side, who in writing home to comfort his
parents on the death of a younger brother
m France, said "He has died a good
death-" They have all died good deaths,
and alas ! it was decreed that the writer
himself should fall in action on the plains
of Mesopotamia.
"Graclh as mo na so chn'n'eil aig neach air bith. gu'n
leigeaclh duine 'anam sios air son a chairdean." — John xv. 13.
DAVID CLARK.