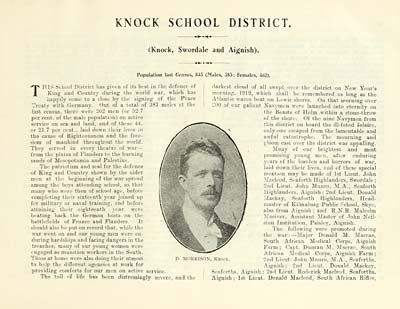 KNOCK SCHOOL DISTRICT.
(Knock, Swordale and Aignish).
Population last Census, 845 (Males, 383: Females, 462).
THIS School District has given of its best in the defence of
King and Country during the world war, which has
happily come to a close by the signing of the Peace
Treaty with Germany. Out of a total of 383 males at the
last census, there were 202 men (or 52.7
per cent, of the male population) on active
service on sea and land, and of these 44,
or 21.7 per cent., laid down their lives m
the cause of Righteousness and the free-
dom of mankind throughout the world.
They served in every theatre of war —
from the plains of Flanders to the burning
sands of Mesopotamia and Palestine.
The patriotism and zeal for the defence
of King and Country shown by the older
men at the beginning of the war spread
among the boys attending school, so that
many who were then of school age, before
completing their sixteenth year joined up
for military or naval training, and before
attaining their eighteenth year were
beating back the German hosts on the
battlefields of France and Flanders. It
should also be put on record that, while the
war went on and our young men were en-
during hardships and facing clangers in the
trenches, many of our young women were
engaged as munition workers in the South.
Those at home were also doing their utmost
to help the different agencies at work for
providing comforts for our men on active service.
The toil of life has been distressingly severe, and the
MORRISON, Knocl;
darkest cloud of all swept over the district on New Year's
morning, 1919, which shall be remembered as long as the
Atlantic waves beat on Lewis shores. On that morning over
-00 of our gallant Navymen were launched into eternity on
the Beasts of Holm within a stone-throw
of the shore. Of the nine Navymen from
this district on board the ill-fated Iolaire,
only one escaped from the lamentable and
awful catastrophe. The mourning and
gloom cast over the district was appalling.
Many of our brightest and most
promising young men, after enduring
years of the burden and horrors of war,
laid down their lives, and of these special
mention may be made of 1st Lieut. John
Macleod, Seaforth Highlanders, Swordale;
2nd Lieut. John Munro, M.A., Seaforth
Highlanders, Aignish ; 2nd Lieut. Donald
Mackay, Seaforth Highlanders, Head-
master of Kilmaluag Public School, Skye,
also from Aignish : and R.N.R. Malcolm
Maciver, Assistant Master of John Neil-
ston Institution, Paisley, Aignish.
The following were promoted during
the war: — Major Donald M. Macrae,
South African Medical Corps, Aignish
Farm ; Capt. Duncan M. Macrae, South
African Medical Corps, Aignish Farm;
2nd Lieut. John Munro, M.A., Seaforths,
Aignish ; 2nd Lieut. Donald Mackav,
Seaforths, Aignish ; 2nd Lieut. Roderick Macleod. Seaforths.
Aignish ; 1st Lieut. Donald Macleod, South African Rifles,