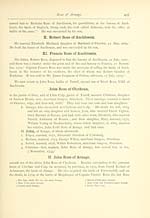 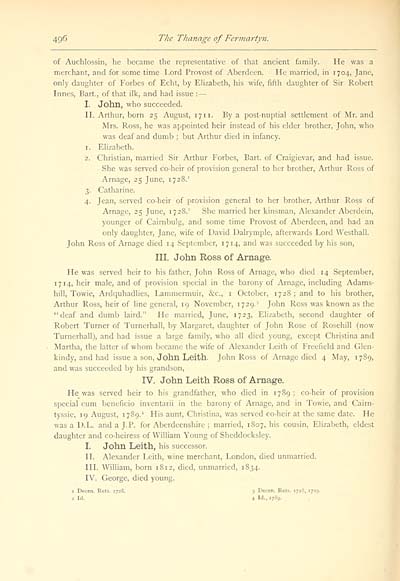 496 TIte Thanagc of Fcrinariyn.
of Auchlossin, he became the representative of that ancient family. He was a
merchant, and for some time Lord Provost of Aberdeen. He married, in 1704, Jane,
only daughter of Forbes of Echt, by Elizabeth, his wife, fifth daughter of Sir Robert
Innes, Bart., of that ilk, and had issue : —
I. John, who succeeded.
II. Arthur, born 25 August, 171 1. By a post-nuptial settlement of Mr. and
Mrs. Ross, he was appointed heir instead of his elder brother, John, who
was deaf and dumb ; but Arthur died in infancy.
1. Elizabeth.
2. Christian, married Sir Arthur Forbes, Bart, of Craigievar, and had issue.
She was served co-heir of provision general to her brother, Arthur Ross of
Arnage, 25 June, 1728.'
3. Catharine.
4. Jean, served co-heir of provision general to her brother, Arthur Ross of
Arnage, 25 June, 1728.= She married her kinsman, Alexander Aberdein,
younger of Cairnbulg, and some time Provost of Aberdeen, and had an
only daughter, Jane, wife of David Dalrymple, afterwards Lord Westhall.
John Ross of Arnage died 14 September, 1714, and was succeeded by his son,
III. John Ross of Arnage.
He was served heir to his father, John Ross of Arnage, who died 14 September,
17 14, heir male, and of provision special in the barony of Arnage, including Adams-
hill, Towie, Ardquhadlies, Lammermuir, &c., i October, 1728; and to his brother,
Arthur Ross, heir of line general, 19 November, 1729.^ John Ross was known as the
"deaf and dumb laird." He married, June, 1723, Elizabeth, second daughter of
Robert Turner of Turnerhall, by Margaret, daughter of John Rose of Rosehill (now
Turnerhall), and had issue a large family, who all died young, except Christina and
Martha, the latter of whom became the wife of Alexander Leith of Freefield and Glen-
kindy, and had issue a son, John Leith. John Ross of Arnage died 4 May, 1789,
and was succeeded by his grandson,
IV. John Leith Ross of Arnage.
He was served heir to his grandfather, who died in 1789; co-heir of provision
special cum beneficio inventarii in the barony of Arnage, and in Towie, and Cairn-
tyssie, 19 August, 1789.'' His aunt, Christina, was served co-heir at the same date. He
was a D.L. and a J.P. for Aberdeenshire ; married, 1807, his cousin, Elizabeth, eldest
daughter and co-heiress of William Young of Sheddocksley.
I. John Leith, his successor.
II. Alexander Leith, wine merchant, London, died unmarried.
III. William, born 1S12, died, unmarried, 1834.
IV. George, died young.
1 Decen. Rets. 1728. 3 Decen. Rets. 172S, 1729.
2 Id. 4 Id., 1789.