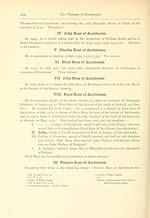 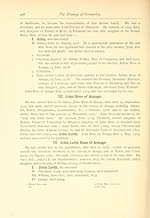 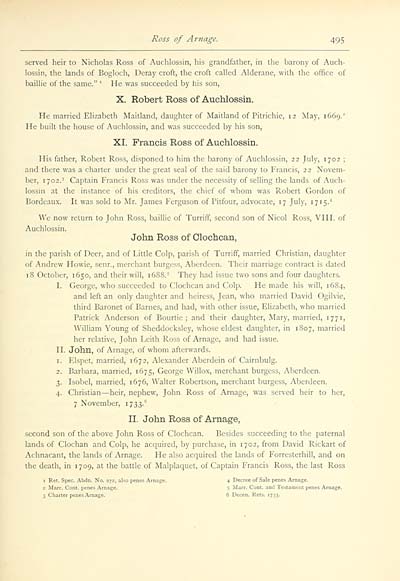 lioss of Arnage. 495
served heir to Nicholas Ross of Auchlossin, his grandfather, in the barony of Auch-
lossin, the lands of Bogloch, Deray croft, the croft called Alderane, with the office of
baillie of the same." ' He was succeeded by his son,
X. Robert Ross of AucMossin.
He married Elizabeth Maitland, daughter of Maitland of Pitrichie, 12 May, 1669.°
He built the house of Auchlossin, and was succeeded by his son,
XI. Francis Ross of Auchlossin.
His father, Robert Ross, disponed to him the barony of Auchlossin, 22 July, 1702 ;
and there was a charter under the great seal of the said barony to Francis, 22 Novem-
ber, 1702.3 Captain Francis Ross was under the necessity of selling the lands of Auch-
lossm at the instance of his creditors, the chief of whom was Robert Gordon of
Bordeaux. It was sold to Mr. James Ferguson of Pitfour, advocate, 17 July, 17 is.''
We now return to John Ross, baillie of Turriff, second son of Nicol Ross, VHI. of
Auchlossin.
John Ross of Clochcan,
in the parish of Deer, and of Little Colp, parish of Turriff, married Christian, daughter
of Andrew Howie, senr., merchant burgess, Aberdeen. Their marriage contract is dated
18 October, 1650, and their will, 1688.^ They had issue two sons and four daughters.
I. George, who succeeded to Clochcan and Colp. He made his will, 1684,
and left an only daughter and heiress, Jean, who married David Ogilvie,
third Baronet of Barnes, and had, with other issue, EUzabeth, who married
Patrick Anderson of Bourtie ; and their daughter, Mary, married, 1771,
William Young of Sheddocksley, whose eldest daughter, in 1807, married
her relative, John Leith Ross of Arnage, and had issue.
n. John, of Arnage, of whom afterwards.
1. Elspet, married, 1672, Alexander Aberdein of Cairnbulg.
2. Barbara, married, 1675, George Willox, merchant burgess, Aberdeen.
3. Isobel, married, 1676, Walter Robertson, merchant burgess, Aberdeen.
4. Christian — heir, nephew, John Ross of Arnage, was served heir to her,
7 November, 1733."^
II. John Ross of Arnage,
second son of the above John Ross of Clochcan. Besides succeeding to the paternal
lands of Clochan and Colp, he acquired, by purchase, in 1702, from David Rickart of
Achnacant, the lands of Arnage. He also acquired the lands of Forresterhill, and on
the death, in 1709, at the battle of Malplaquet, of Captain Francis Ross, the last Ross
1 Ret. Spec. Abdn. No. 272, also penes Arnage. 4 Decree of Sale penes Arnage.
2 Marr. Cont. penes Arnage. 5 Marr. Cont. and Testament penes Arnage.
3 Charter penes Arnage. 6 Decen. Rets. 1733.