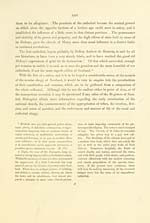 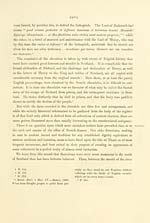 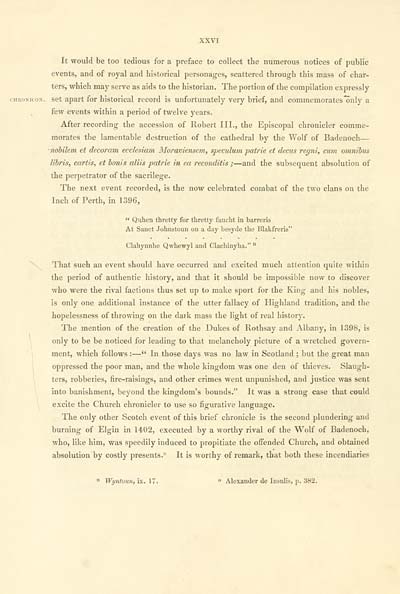 It would be too tedious for a preface to colleet the numerous notices of public
events, and of royal and historical personages, scattered through this mass of char-
ters, which may serve as aids to the historian. The portion of the compilation expressly
chronicon. set apart for historical record is unfortunately very brief, and commemorates*only a
few events within a period of twelve years.
After recording the accession of Robert III., the Episcopal chronicler comme-
morates the lamentable destruction of the cathedral by the Wolf of Badenoch —
nobilem et decoram ecclesiam Moraviensem, speculum patrie et decus regni, cum omnibus
libris, cartis, et bonis aliis patrie in ea reconditis ; — and the subsequent absolution of
the perpetrator of the sacrilege.
The next event recorded, is the now celebrated combat of the two clans on the
Inch of Perth, in 1396,
" Quhen thretty for thretty faucht in barreris
At Sanet Johnstoun on a day besyde the Blakfreris"
Clahynnhe Qwhewyl and Claehinyha." n
That such an event should have occurred and excited much attention quite within
the period of authentic history, and that it should be impossible now to discover
who were the rival factions thus set up to make sport for the King and his nobles,
is only one additional instance of the utter fallacy of Highland tradition, and the
hopelessness of throwing on the dark mass the light of real history.
The mention of the creation of the Dukes of Rothsay and Albany, in 1398, is
only to be be noticed for leading to that melancholy picture of a wretched govern-
ment, which follows : — " In those days was no law in Scotland ; but the great man
oppressed the poor man, and the whole kingdom was one den of thieves. Slaugh-
ters, robberies, fire-raisings, and other crimes went unpunished, and justice was sent
into banishment, beyond the kingdom's bounds." It was a strong case that could
excite the Church chronicler to use so figurative language.
The only other Scotch event of this brief chronicle is the second plundering and
burning of Elgin in 1402, executed by a worthy rival of the Wolf of Badenoch,
who, like him, was speedily induced to propitiate the ofFended Church, and obtained
absolution by costly presents.° It is worthy of remark, that both these incendiaries
n Wyntoun, ix. 17. ° Alexander de Insulis, p. 382.