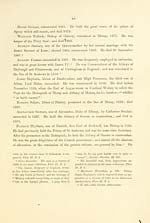 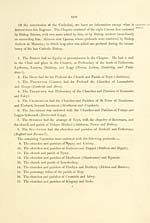 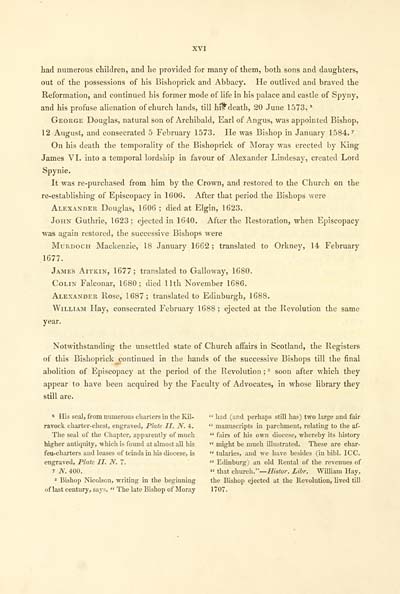 had numerous children, and he provided for many of them, both sons and daughters,
out of the possessions of his Bishoprick and Abbacy. He outlived and braved the
Reformation, and continued his former mode of life in his palace and castle of Spyny,
and his profuse alienation of church lands, till hiffdeath, 20 June 1573. *
George Douglas, natural son of Archibald, Earl of Angus, was appointed Bishop,
12 August, and consecrated 5 February 1573. He was Bishop in January 1584. y
On his death the temporality of the Bishoprick of Moray was erected by King
James VI. into a temporal lordsliip in favour of Alexander Lindesay, created Lord
Spynie.
It was re-purchased from him by the Crown, and restored to the Church on the
re-establishing of Episcopacy in 1606. After that period the Bishops were
Alexander Douglas, 1606 ; died at Elgin, 1623.
John Guthrie, 1623; ejected in 1640. After the Restoration, when Episcopacy
was again restored, the successive Bishops were
Murdoch Mackenzie, 18 January 1662 ; translated to Orkney, 14 February
1677.
James Aitkin, 1677; translated to Galloway, 1680.
Colin Falconar, 1680; died llth November 1686.
Alexander Rose, 1687; translated to Edinburgh, 1688.
William Hay, consecrated February 1688; ejected at the Revolution the same
year.
Notwithstanding the unsettled state of Church affairs in Scotland, the Registers
of this Bishoprick continued in the hands of the successive Bishops till the final
abolition of Episcopacy at the period of the Revolution ; 2 soon after which they
appear to have been acquired by the Faculty of Advocates, in whose library they
still are.
* His seal, from numerous charlers in the Kil- " had (and perhaps still has) two large and fair
ravock charter-chest, engraved, Plate II. N. 4. " manuscripts in parchment, relating to the af-
The seal of the Chapter, apparently of much " fairs of his own dioeese, whereby its history
higher antiquity, which is found at almost all his " might be much illustrated. These are char-
feu-charters and leases of teinds in his diocese, is " tularies, and we have besides (in bibl. ICC.
engraved, Plate II. N. 7. " Edinburg) an old Rental of the revenues of
y N. 400. " that church."— Histor. Libr. William Hay,
z Bishop Nicolson, writing in the begiuning the Bishop ejected at the Revolution, lived till
of last century, say«. " The late Bishop of Moray 1707.