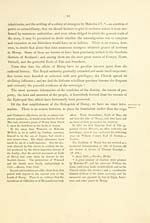 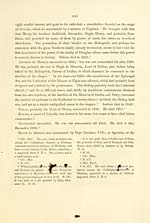 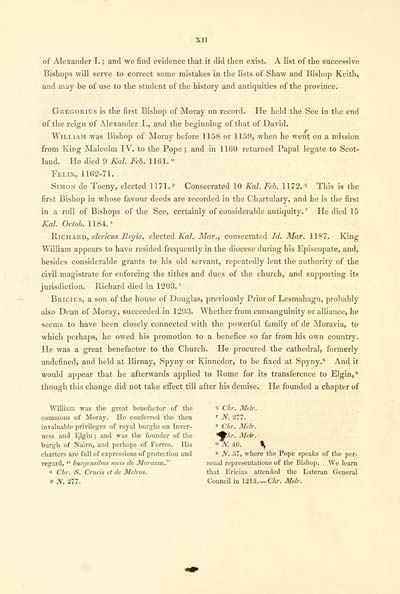 of Alexander I. ; and we find evidence that it did then exist. A list of the successive
Bishops will serve to correct some mistakes in the lists of Shaw and Bishop Keith,
and may be of use to the student of the history and antiquities of the province.
Gregorius is the first Bishop of Moray on record. He held the See in the end
of the reign of Alexander I., and the beginning of that of David.
William was Bishop of Moray before 1158 or 1159, when he went on a mission
from King Malcolm IV. to the Pope ; and in 1160 returned Papal legate to Scot-
land. He died 9 Kal. Feb. 1161. °
Felix, 1162-71.
Simon de Toeny, elected 1171. p Consecrated 10 Kal. Feb. 1172. ^ This is the
first Bishop in whose favour deeds are recorded in the Chartulary, and he is the first
in a roll of Bishops of the See, certainly of considerable antiquity. r He died 15
Kal. Octob. 1184. s
Richakd, clericus Begis, elected Kal. Mar., consecrated Id. Mar. 1187. King
William appears to have resided frequently in the diocese during his Episcopate, and,
besides considerable grants to his old servant, repeatedly lent the authority of the
civil magistrate for enforcing the tithes and dues of the church, and supporting its
jurisdiction. Richard died in 1203.'
Bricius, a son of the house of Douglas, previously Prior of Lesmahagu, probably
also Dean of Moray, succeeded in 1203. Whether from consanguinity or alliance, he
seems to have been closely connected with the powerful family of de Moravia, to
which perhaps, he owed his promotion to a benefice so far from his own country.
He was a great benefactor to the Church. He procured the cathedral, formerly
undefined, and held at Birnay, Spyny or Kinnedor, to be fixed at Spyny. And it
would appear that he afterwards applied to Rome for its transference to Elgin,*
though this change did not take effect till after his demise. He founded a chapter of
William was the great benefactor of the
commons of Moray. He conferred the then
invaluable privileges of royal burghs on Inver-
ness and Elgin ; and was the founder of the
burgh of Naim, and perhaps of Forres. His
charters are full of expressions of protection and
regard, " burgensibus meis de Moravia."
° Chr. S. Crucis et de Melros.
p N. 277.
9 Chr. Melr.
* N. 277.
s Chr. Melr.
<&/ir. Mclr. ■
n N. 46. %
x N. 57, where the Pope speaks of the per-
soual representations of the Bishop. We learn
that Bricius attended the Lateran General
Councilin 1215 Chr. Melr.