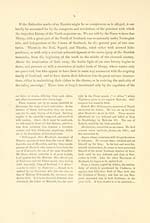 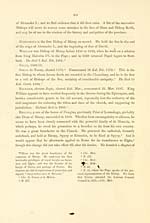 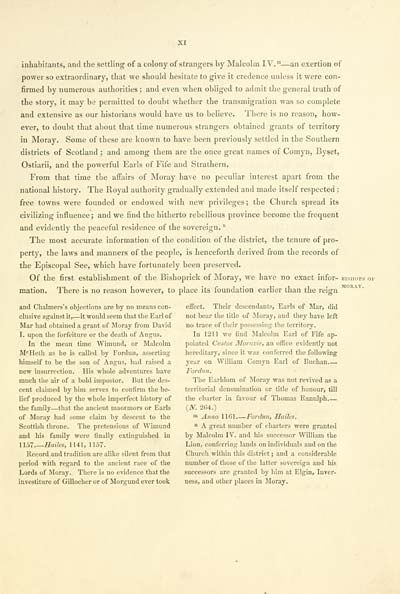 inhabitants, and the settling of a colony of strangers by Malcolm I V. m — an exertion of
power so extraordinary, that we should hesitate to give it credenee unless it were con-
firmed by numerous authorities ; and even when obliged to adinit the general truth of
the story, it may be permitted to doubt whether the transmigration was so eomplete
and extensive as our historians would have us to believe. There is no reason, how-
ever, to doubt that about that time numerous strangers obtaincd grants of territory
in Moray. Some of these are known to have been previously settled in the Southern
districts of Scotland ; and among them are the once great names of Comyn, Byset,
Ostiarii, and the powerful Earls of Fife and Strathern.
From that time the aftairs of Moray have no peculiar interest apart from the
national history. The Royal authority gradually extended and made itself respected ;
free towns were founded or endowed with new privileges ; the Church spread its
civilizing influence; and we find the hitherto rebellious province become the frequent
and evidently the peaceful residence of the sovereign. n
The most accurate iuformation of the condition of the district, the tenure of pro-
perty, the laws and manners of the people, is henceforth derived from the records of
the Episcopal See, which have fortunately been preserved.
Of the first establishment of the Bishoprick of Moray, we have no exact infor- bishops of
mation. There is no reason however, to place its foundation earlier than the reign
and Chalmers's objections are by no meanscon-
clusive against it, — it would seem tliat the Earl of
Mar had obtained a grant of Moray from David
I. upon the forfeiture or the death of Angus.
In the mean time Wimund, or Malcolm
M c Hclh as he is called by Fordun, asserting-
himself to be the son of Angus, had raised a
new insurrcetion. His whole adventures have
much the air of a bold impostor. But the des-
cent elaimed by him serves to confirm the be-
lief produccd by the whole imperfect history of
the family — that the ancient maormors or Earls
of Moray had some claim by descent to the
Scottish throne. The pretensions of Wimund
and his family were finally extinguished in
1157 Hailes, 1141, 1157.
Record and tradition are alike silent from tliat
period with regard to the ancient race of the
Lords of Moray. There is no evidence that the
investiture of Gillocher or of Morgund ever took
effect. Their descendants, Earls of Mar, did
not bear the title of Moray, and they have left
no trace of their possessing the territory.
In 1211 we find Malcolm Earl of Fife ap-
pointcd Cfslos Moravie, an ofEco cvidcntly not
hereditary, since it was conferred the following
year on William Comyn Earl of Buchan
Fordun.
The Earldom of Moray was not revived as a
territorial denomination or title of honour, till
the charter in favour of Thomas Ranulph
(2V. 264.)
m Anno 1161 Fordun, Hailes.
n A great number of charters were granted
by Malcolm IV. and his successor William the
Lion, conferring lands on individuals and on the
Church within this district ; and a considerable
number of those of the latter sovereign and his
successors are granted by him at Elgin, Inver-
ness, and other places in Moray.