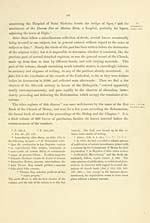 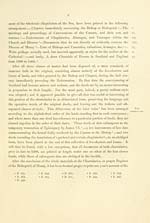 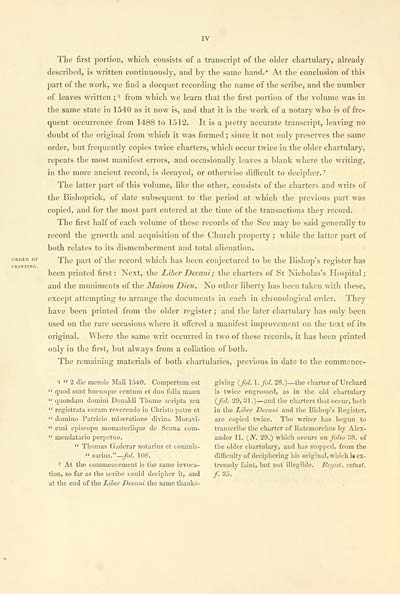 The first portion, which consists of a transcript of the older chartulary, already
described, is written continuously, and by the same hand.* At the conclusion of this
part of the work, we find a docquet recording the name of the scribe, and the number
of leaves written ; ' from which we learn that the first portion of the volume was in
the same state in 1540 as it now is, and that it is the work of a notary who is of fre-
quent occurrence from 1488 to 1512. It is a pretty accurate transcript, leaving no
doubt of the original from which it was formed ; since it not only preserves the same
order, but frequently copies twice charters, which occur twice in the okler chartulary,
repeats the most manifest errors, and occasionally leaves a blank where the writing,
in the more ancient record, is decayed, or otherwise difficult to decipher. '
The latter part of this volume, like the other, consists of the charters and writs of
the Bishoprick, of date subsequent to the period at which the previous part was
copied, and for the most part entered at the time of the transactions they record.
The first half of each volume of these records of the See may be said generally to
record the growth and acquisition of the Church property ; while the latter part of
both relates to its dismemberment and total alienation.
The part of the record which has been conjectured to be the Bishop's register has
been printed first : Next, the Liber Decani; the charters of St Nicholas's Hospital ;
and the muniments of the Maison Dieu. No other liberty has been taken with these,
except attempting to arrange the documents in each in chronological order. They
have been printed from tlie older register ; and the later chartulary has only been
used on the rare occasions where it offered a manifest improvement on the text of its
original. Where the same writ occurred in two of these records, it has been printed
only in the first, but always from a collation of both.
The remaining materials of both chartularies, previous in date to the commence-
i " 2 die mensis Maii 1540. Compertum est giving (Jbl. \.fol. 2S.) — the charter of Urehard
" quod sunt hucusque centum et duo folia manu is twice engrossed, as in the old chartulary
" quondam domini Donaldi Thome scripta seu (fol. 29,31.) — and the charters that occur, both
" registrata coram reverendo in Christo patre et in the Liber Decani and the Bishop's Register,
" domino Patricio miseratione divina Moravi- are copied twice. Tlie writer has begun to
" ensi episeopo monasteriique de Scona com- transcribe the charter of Ratemorchus by Alex-
" mendatario perpetuo. ander II. (N. 29.) which occurs on folio 38. of
" Thomas Gaderar notarius et eommis- the older chartulary, and has stoppcd, from the
" sarius."— -fol. 108. difficulty of deeiphering his original,which i§ex-
r At the commeneement is the same invoca- tremely faint, but not illegible. Rer/ist. vctust.
tion, so far as the scribe could decipher it, and f. 35.
at the end of the Liber Deccmi the same thanks-