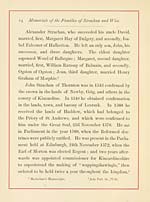 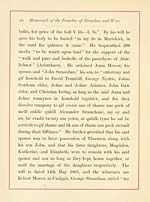 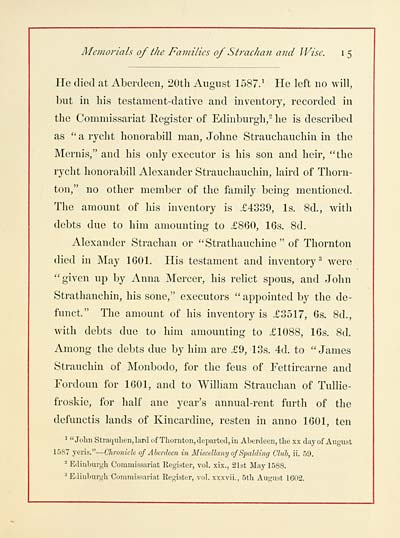 Memorials of the Families of Strachan and Wise. i 5
He died at Aberdeen, 20tli August 1587.^ He left no will,
but in liis testament-dative and inventory, recorded in
the Commissariat Register of Edinburgh,^ he is described
as " a ryclit honorabill man, Johne Strauchauchin in the
Mernis," and his only executor is his son and heir, "the
ryclit honorabill Alexander Strauchauchin, laird of Thorn-
ton," no other member of the family being mentioned.
The amount of his inventory is £4339, Is. 8d., with
debts due to him amounting to £860, 16s. 8d.
Alexander Strachan or ''Strathauchine " of Thornton
died in May 1601. His testament and inventory^ were
"given up by Anna Mercer, his relict spous, and John
Strathanchin, his sone," executors " appointed by the de-
funct." The amount of his inventory is £3517, 6s. 8d.,
with debts due to him amounting to £1088, 16s. 8d.
Among the debts due by him are £9, 13s. 4d. to "James
Strauchin of Monbodo, for the feus of Fettircarne and
Fordoun for 1601, and to William Strauchan of Tullie-
froskie, for half ane year's annual-rent furth of the
defunctis lands of Kincardine, resten in anno 1601, ten
^ " Jolin Straqulieii, lard of Thornton, departed, in Aberdeen, the xx day of August
1587 yeris." — CJironide of Aberdeen in Miscellany of Simlding Club, ii. 59.
^ Edinburgh Commissariat Register, vol. xix., 21st May 1588.
^Edinburgh Commissariat Register, vol. xxxvii., 5th August 1602.