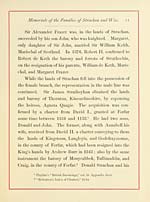 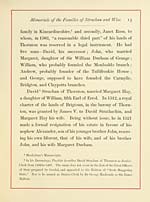 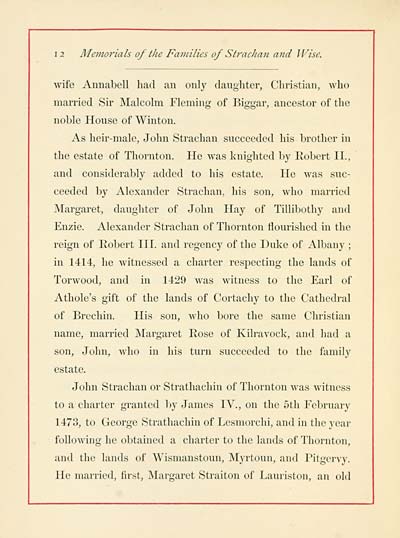 12 ManoJ'ials of the Families of SiracJian and Wise.
wife Annabell had an only daughter, Christian, who
married Sir Malcolm Flemhig of Biggar, ancestor of the
noble House of Winton.
As heir-male, John Strachan succeeded his brother in
the estate of Thornton. He was knighted by Robert II.,
and considerably added to his estate. He Avas suc-
ceeded by Alexander Strachan, his son, who married
Margaret, daughter of John Hay of Tillibothy and
Enzie. Alexander Strachan of Thornton flourished in the
reign of Robert III. and regency of the Duke of Albany ;
in 1414, he witnessed a charter respecting the lands of
Torwood, and in 1429 was witness to the Earl of
Athole's gift of the lands of Cortachy to the Cathedral
of Brechin. His son, who bore the same Christian
name, married Margaret Rose of Kilravock, and had a
son, John, who in his turn succeeded to the family
estate.
John Strachan or Strathachin of Thornton was witness
to a charter granted l)y James IV., on the 5tli February
1473, to George Strathachin of Lesmorchi, and in the year
following he obtained a charter to the lands of Thornton,
and the lands of Wismanstoun, Myrtoun, and Pitgervy.
He married, first, Margaret Straiten of Lauriston, an old