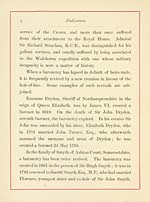 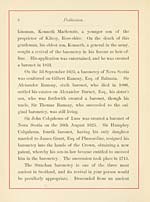 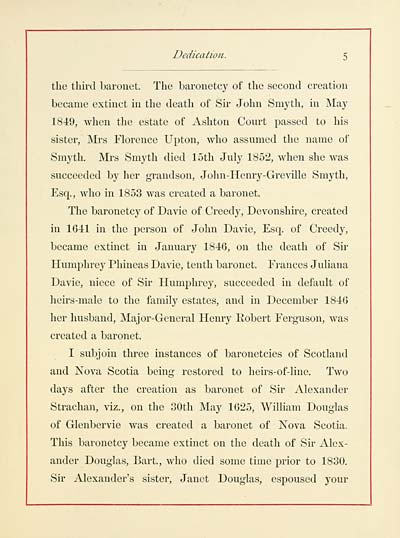 Dedication.
the third baronet. The baronetcy of the second creation
became extinct in the death of Sir John Smytli, in May
1849, when the estate of Ashton Court passed to his
sister, Mrs Florence Upton, who assumed the name of
Smyth. Mrs Smyth died 15th July 1852, when she was
succeeded by her grandson, Jolm-Henry-Greville Smyth,
Esq., who in 1853 was created a baronet.
The baronetcy of Davie of Greedy, Devonshire, created
in 1641 in the person of John Davie, Esq. of Greedy,
became extinct in January 1846, on the death of Sir
Humphrey Phineas Davie, tenth baronet. Frances Juliana
Davie, niece of Sir Humphrey, succeeded in default of
heirs-male to the family estates, and in December 1846
her husband, Major-General Henry Robert Ferguson, was
created a baronet.
I subjoin three instances of baronetcies of Scotland
and Nova Scotia being restored to heirs-of-line. Two
days after the creation as baronet of Sir Alexander
Strachan, viz., on the 30th May 1625, William Douglas
of Glenbervie was created a baronet of Nova Scotia.
This baronetcy became extinct on the death of Sir Alex-
ander Douglas, Bart, who died some time prior to 1830.
Sir Alexander's sister, Janet Douglas, espoused your