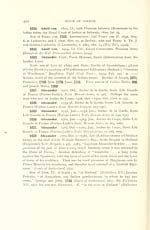 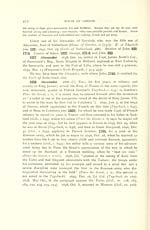 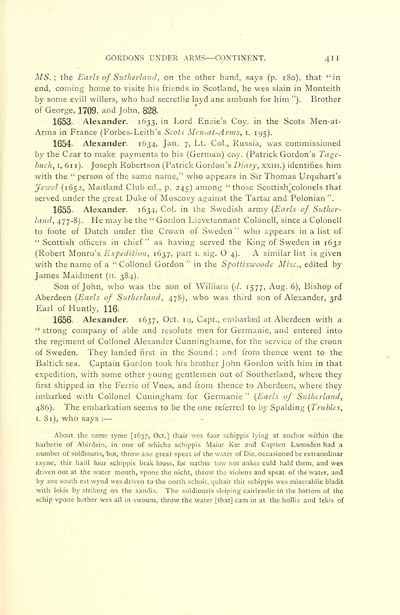 GORDONS UNDER ARMS — C9NTINENT. 4II
MS.; the Earls of Sutherland, on the other hand, sa)'s (p. 180), that "in
end, coming home to visite his friends in Scotland, he wes slain in Monteith
by some evill vvillers, who had secretlie layd ane ambush for him "). Brother
of George, 1709, and John, 828-
1653. Alexander. 1633, in Lord Enzie's Coy. in the Scots Men-at-
Arms in France (Forbes-Leith's Scots Men-at-Arms, i. 195).
1654. Alexander. 1634, Jan. 7, Lt. Col., Russia, was commissioned
by the Czar to make payments to his (German) coy. (Patrick Gordon's Tage-
bttcli, I. 611). Joseph Robertson (Patrick Gordon's Diary, xxiii.) identifies him
with the " person of the same name," who appears in Sir Thomas Urquhart's
yeiocl (1652, Maitland Club ed., p. 245) among "those ScottishVcolonels that
served under the great Duke of Muscovy against the Tartar and Polonian ".
1655- Alexander. 1634, Col. in the Swedish army {Earls of Suther-
land, 477-8). He may be the " Gordon Lievetennant Colonell, since a Colonell
to foote of Dutch under the Crown of Sweden " who appears in a list of
"Scottish officers in chief" as having served the King of Sweden in 1632
(Robert Monro's Expedition, 1637, part i. sig. O 4). A similar list is given
with the name of a " CoUonel Gordon " in the Spottiswoode Misc., edited by
James Maidment (11. 384).
Son of John, who was the son of William {d. 1577, Aug. 6), Bishop of
Aberdeen {Earls of Sutherland, 478), who was third son of Ale.xander, 3rd
Earl ofHuntly, 116.
1656- Alexander. 1637, Oct. ig, Capt., embarked at Aberdeen with a
" strong company of able and resolute men for Germanic, and entered into
the regiment of Collonel Ale.xander Cunninghame, for the service of the croun
of Sweden. They landed first in the Sound ; and from thence went to the
Baltick sea. Captain Gordon took his brother John Gordon with him in that
expedition, with some other 3'oung gentlemen out of Southerland, where they
first shipped in the Ferrie of Vnes, and from thence to Aberdeen, where they
imbarked with Collonel Cuningham for Germanie " {Earls of Sutherland,
486). The embarkation seems to be the one referred to by Spalding {Trubles,
I. 81), who says : —
About the same tyme [1637, Oct.] thair wes four schippis lying at anchor within the
harberie of Abirdein, in one of whiche schippis Maior Ker and Capiten Lumsden had a
number of soldiouris, hot, throw ane great speat of the water of Die, occasioned be extraordinar
rayne, thir haill four schippis bralt louss, for nather tow nor anker culd bald them, and wes
driven out at the water mouth, vpone the nicht, throw the violens and speat of the water, and
by ane south est wynd wes driven to the north schoir, quhair thir schippis wes miserablie bladit
with lekis by strikmg on the sandis. The soldiouris sleiping cairlesslie in the bottom of the
schip vpone hether wes all in swoum, throw the water [that] cam in at the hollis and lekis of