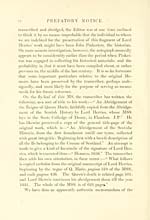 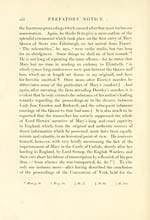 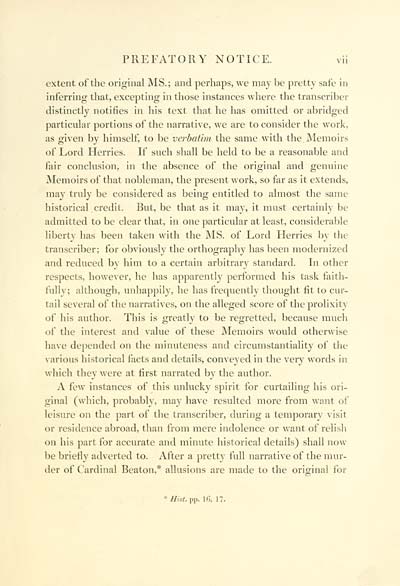 PREFATORY NOTICE. vil
extent ot the original JNIS.; and perliaps, we may be pretty sate in
inferring that, excepting in those instances where the transcriber
distinctly notifies in his text that he has omitted or abridged
particular portions ot" the narrative, we are to consider the work,
as given by himself, to be verhatbn the same with the. Memoirs
of Lord Herries. If such shall be held to be a reasonable and
fair conclusion, in the absence of the original and genuine
Memoirs of that nobleman, the present work, so far as it extends,
may truly be considered as being entitled to almost the same
historical credit. But, be that as it may, it must certainly be
admitted to be clear that, in one particular at least, considerable
liberty has been taken with the IMS. of Lord Herries by the
transcriber; for obviously the orthography has been modernized
and reduced by him to a certain arbitrary standard. In other
respects, however, he has apparently performed his task faith-
fully; although, unhappily, he has frequently thought fit to cur-
tail several of the narratives, on the alleged score of the prolixity
of his author. This is greatly to be regretted, because much
of the interest and value of these Memoirs would otherwise
have depended on the minuteness and circumstantiality of the
various historical facts and details, conveyed in the very words in
which they were at first narrated by the author.
A few" instances of this unlucky spirit for curtailing his ori-
ginal (which, probably, may have resulted more from want of
leisure on the part of the transcriber, during a temporary ^ isit
or residence abroad, than from mere indolence or want of relish
on his part for accurate and minute historical details) shall now
be briefly adverted to. After a pretty full narrative of the mur-
der of Cardinal Beaton,* allusions are made to the original for
* Hist. pp. 16, 1".