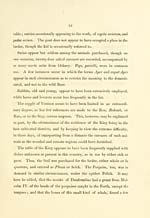 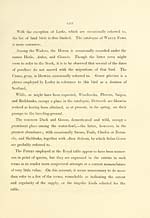 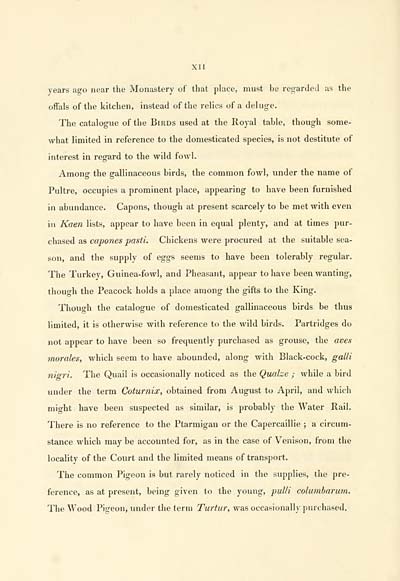 XII
years ago near the Monastery of tliat place, must be regarded as the
offals of the kitchen, instead of the relics of a deluge.
The catalogue of the Birds used at the Royal table, though sonie-
vvhat limited in reference to the domesticated species, is not destitute of
interest in regard to the wild fowl.
Among the gallinaceous birds, the common fowl, under the name of
Pultre, occupies a prominent place, appearing to have been furnished
in abundance. Capons, though at present scarcely to be met with even
in Kaen lists, appear to have been in equal plenty, and at times pur-
chased as capones pasti. Chickens were procured at the suitable sea-
son, and the supply of eggs seems to have been tolerably regular.
The Turkey, Guinea-fowl, and Pheasant, appear to have been wanting,
though the Peacock holds a place among the gifts to the King.
Though the catalogue of domesticated gallinaceous birds be thus
limited, it is otherwise with reference to the wild birds. Partridges do
not appear to have been so frequently purchased as grouse, the aves
morales, which seem to have abounded, along with Black-cock, galli
nigri. The Quail is occasionally noticed as the Qualze ; while a bird
under the term Coturnix, obtained from August to April, and which
might have been suspected as similar, is probably the Water Rail.
There is no reference to the Ptarmigan or the Capercaillie ; a circum-
stance which may be accounted for, as in the case of Venison, from the
locality of the Court and the limited means of transport.
The common Pigeon is but rarely noticed in the supplies, the pre-
ference, as at present, being givcn to the young, pulli columharum.
The Wood Pigeon, under the teriii Turtur, was occasionally piuchased.