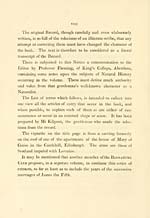 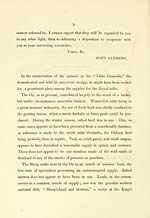 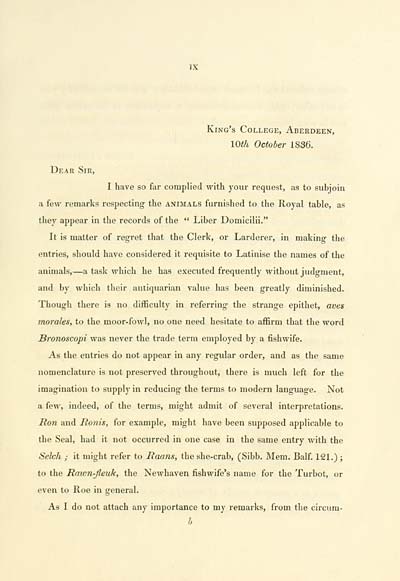 IX
King's College, Aberdeen,
lOth October 18S6.
Dear Sir,
I have so fur complied with your request, as to subjoiu
a few remarks respecting the animals furnished to the Royal table, as
they appear in the records of the " Liber Domicilii."
It is matter of regret that the Clerk, or Larderer, in making the
entries, should have considered it requisite to Latinise the names of the
animals, — a task which he has executed frequently without judgment,
and by which their antiquarian value has been greatly diminished.
Though there is no difBculty in referring the strange epithet, aves
morales, to the moor-fowl, no one need hesitate to affirm that the word
Bronoscopi was never the trade term employed by a fishwife.
As the entries do not appear in any regular order, and as the same
nomenclature is not preserved throughout, there is much left for the
iraagination to supply in reducing the terms to modern language. Not
a few, indeed, of the terms, might admit of several interpretations.
Ron and Ronis, for example, might have been supposed applicable to
the Seal, hud it not occurred in one case in the same entry with the
Selch ; it might refer to Raans, the she-crab, (Sibb. Mem. Balf. 12L) ;
to the Rawn-fleuk, the Newhaven fishwife's nanie for the Turbot, or
even to Roe in general.
As I do not attach any importance to my reraarks, from the circum-
h