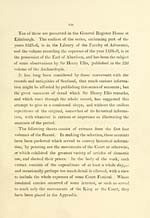 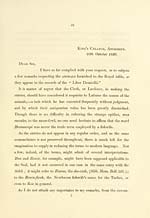 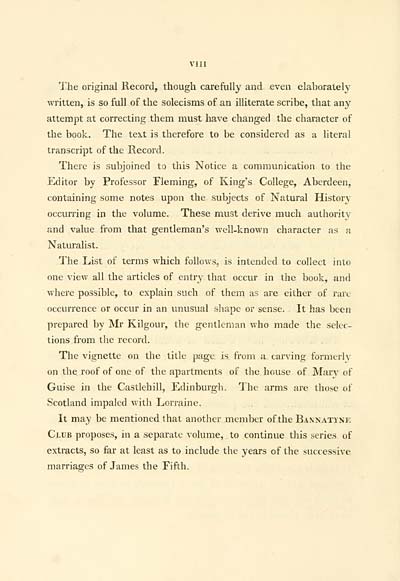 V!1I
The original Record, thougli carefully and even elahorately
written, is so full of the solecisms of an ilUterate scribe, that any
attempt at correcting them must have changed the character of
the book. The text is therefore to be considered as a hteral
transcript of the Record.
There is subjoined to this Notice a communication to the
Editor by Professor Fleming, of King's CoUege, Aberdeen,
containing some notes upon the subjects of Natural History
occurring in the volume. These must derive much authorit}'
and value from that gentleman's well-known character as a
Naturalist.
The List of terms which follov»'s, is intended to coUect into
one view all the articles of entry that occur in the book, and
where possible, to explain such of them as are either of rare
occurrence or occur in an unusual sliape or sense. It has been
prepared by Mr Kilgour, the gentlenian who made the selcc-
tions from the rccord.
The vignette on the title page is from a carving formerlv
on the roof of one of the apartments of the house of Mary of
Guise in the Castlehill, Edinburgh. The arms are those of
Scotland impaled Avitli Lorraine.
It may be mentioned that another member of the Bannatine
Club proposes, in a separate volume, to continue this series of
extracts, so far at least as to include the years of the successive
marriages of James the Fifth.