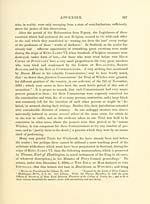 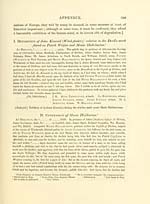 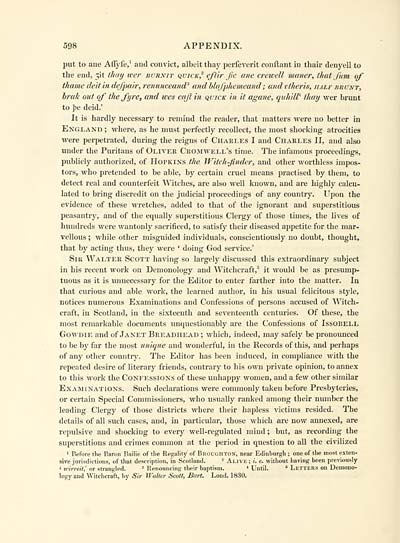 598 APPENDIX.
put to ane Aflyfe,' and convict, albeit thay perfeverit conftant in thair denyell to
the end, 5it thay wcr burnit quick,^ eftir fic ane crewcll maner, that Jiim of
thame deitindejpair, renunceand^ andhlajphemeand ; andvtheris, half brunt,
hrali out of the J'yre, and ives cajl in quick in it agane, quhiW thay wer brunt
to pe deid.'
It is hardly necessary to remind the reader, that matters were no better in
England ; where, as he must perfectly recollect, the most shocking atrocities
were perpetrated, during the reigns of Charles I and Charles II, and also
under the Puritans of Oliver Cromwell's time. The infamous proceedings,
publicly authorized, of Hopkins the Witch-finder, and other worthless impos-
tors, who pretended to be able, by certain cruel means practised by them, to
detect real and counterfeit Witches, are also well known, and are highly calcu-
lated to bring discredit on the judicial proceedings of any country. Upon the
evidence of these wretches, added to that of the ignorant and superstitious
peasantry, and of the equally superstitious Clergy of those times, the lives of
hundreds were wantonly sacrificed, to satisfy their diseased appetite for the mar-
vellous ; while other misguided individuals, conscientiously no doubt, thought,
that by acting thus, they were ' doing God service.'
Sir Walter Scott having so largely discussed this extraordinary subject
in his recent work on Demonology and Witchcraft,' it would be as presump-
tuous as it is unnecessary for the Editor to enter farther into the matter. In
that curious and able work, the learned author, in his usual felicitous style,
notices numerous Examinations and Confessions of persons accused of Witch-
craft, in Scotland, in the sixteenth and seventeenth centuries. Of these, the
most remarkable documents unquestionably are the Confessions of Issobell
GowDiE and of Janet Breadhead ; which, indeed, may safely be pronounced
to be by far the most unique and wonderful, in the Records of this, and perhaps
of any other country. The Editor has been induced, in compliance with the
repeated desire of literary friends, contrary to his own private opinion, to annex
to this work the Confessions of these unhappy women, and a few other similar
Examinations. Such declarations were commonly taken before Presbyteries,
or certain Special Commissioners, who usually ranked among their number the
leading Clergy of those districts where their hapless victims resided. The
details of all such cases, and, in particular, those which are now annexed, are
repulsive and shocking to every well-regulated mind ; but, as recording the
superstitions and crimes common at the period in question to all the civilized
' Before the Baron Bailie of the Regality of Broughton, near Edinburgh ; one of the most exten-
sive jurisdictions, of that description, in Scotland. ' Alive ; i. e. without having been previously
' wirreif,' or strangled. ' Renouncing their baptism. ' Until. ' Letters on Demono-
logy and Witchcraft, by Sir Walter Scott, Bart. Lond. 1830.