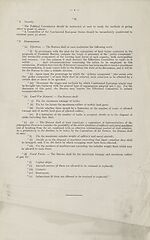 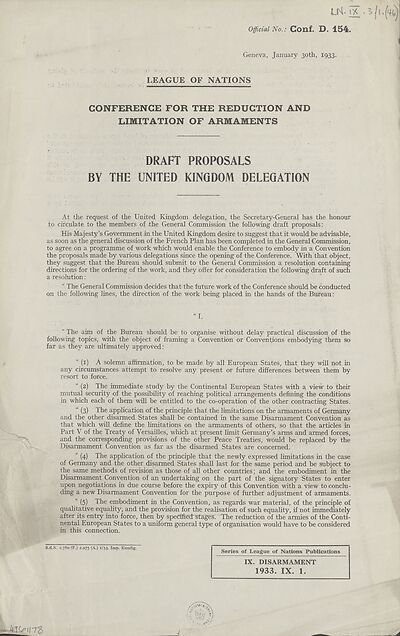 Official No.: Conf. D. 154.
Geneva, January 30th, 1933.
LEAGUE OF NATIONS
CONFERENCE FOR THE REDUCTION AND
LIMITATION OF ARMAMENTS
DRAFT PROPOSALS
BY THE UNITED KINGDOM DELEGATION
At the request of the United Kingdom delegation, the Secretary-General has the honour
to circulate to the members of the General Commission the following draft proposals:
His Majesty’s Government in the United Kingdom desire to suggest that it would be advisable,
as soon as the general discussion of the French Plan has been completed in the General Commission,
to agree on a programme of work which would enable the Conference to embody in a Convention
the proposals made by various delegations since the opening of the Conference. With that object,
they suggest that the Bureau should submit to the General Commission a resolution containing
directions for the ordering of the work, and they offer for consideration the following draft of such
a resolution:
“ The General Commission decides that the future work of the Conference should be conducted
on the following lines, the direction of the work being placed in the hands of the Bureau:
“1.
" The aim of the Bureau should be to organise without delay practical discussion of the
following topics, with the object of framing a Convention or Conventions embodying them so
far as they are ultimately approved:
“ (1) A solemn affirmation, to be made by all European States, that they will not in
any circumstances attempt to resolve any present or future differences between them by
resort to force.
“ (2) The immediate study by the Continental European States with a view to their
mutual security of the possibility of reaching political arrangements defining the conditions
in which each of them will be entitled to the co-operation of the other contracting States.
“ (3) The application of the principle that the limitations on the armaments of Germany
and the other disarmed States shall be contained in the same Disarmament Convention as
that which will define the limitations on the armaments of others, so that the articles in
Part V of the Treaty of Versailles, which at present limit Germany’s arms and armed forces,
and the corresponding provisions of the other Peace Treaties, would be replaced by the
Disarmament Convention as far as the disarmed States are concerned.
“ (4) The application of the principle that the newly expressed limitations in the case
of Germany and the other disarmed States shall last for the same period and be subject to
the same methods of revision as those of all other countries; and the embodiment in the
Disarmament Convention of an undertaking on the part of the signatory States to enter
upon negotiations in due course before the expiry of this Convention with a view to conclu¬
ding a new Disarmament Convention for the purpose of further adjustment of armaments.
“ (5) The embodiment in the Convention, as regards war material, of the principle of
qualitative equality, and the provision for the realisation of such equality, if not immediately
after its entry into force, then by specified stages. The reduction of the armies of the Conti¬
nental European States to a uniform general type of organisation would have to be considered
in this connection.
Series of League of Nations Publications
IX. DISARMAMENT
1933. IX. 1.
S.d.N. 2.760 (F.) 2.075 (A.) 1/33. Imp. Kundig.