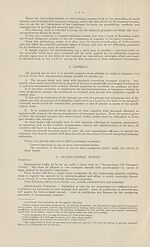 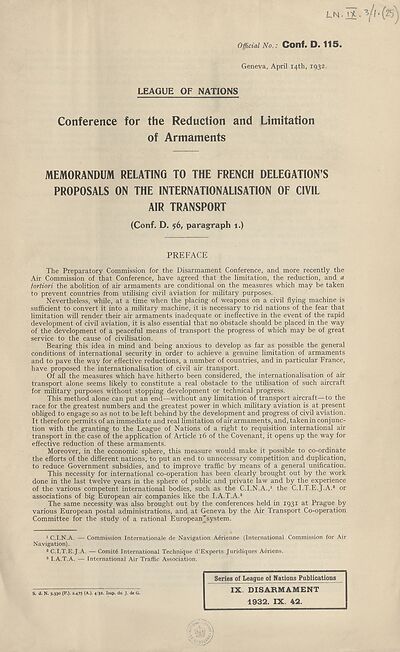 LN • ** •
Official No.: Conf. D. 115.
Geneva, April 14th, 1932.
LEAGUE OF NATIONS
Conference for the Reduction and Limitation
of Armaments
MEMORANDUM RELATING TO THE FRENCH DELEGATION’S
PROPOSALS ON THE INTERNATIONALISATION OF CIVIL
AIR TRANSPORT
(Conf. D. 56, paragraph 1.)
PREFACE
The Preparatory Commission for the Disarmament Conference, and more recently the
Air Commission of that Conference, have agreed that the limitation, the reduction, and a
fortiori the abolition of air armaments are conditional on the measures which may be taken
to prevent countries from utilising civil aviation for military purposes.
Nevertheless, while, at a time when the placing of weapons on a civil flying machine is
sufficient to convert it into a military machine, it is necessary to rid nations of the fear that
limitation will render their air armaments inadequate or ineffective in the event of the rapid
development of civil aviation, it is also essential that no obstacle should be placed in the way
of the development of a peaceful means of transport the progress of which may be of great
service to the cause of civilisation.
Bearing this idea in mind and being anxious to develop as far as possible the general
conditions of international security in order to achieve a genuine limitation of armaments
and to pave the way for effective reductions, a number of countries, and in particular France,
have proposed the internationalisation of civil air transport.
Of all the measures which have hitherto been considered, the internationalisation of air
transport alone seems likely to constitute a real obstacle to the utilisation of such aircraft
for military purposes without stopping development or technical progress.
This method alone can put an end—without any limitation of transport aircraft—to the
race for the greatest numbers and the greatest power in which military aviation is at present
obliged to engage so as not to be left behind by the development and progress of civil aviation.
It therefore permits of an immediate and real limitation of air armaments, and, taken in conjunc¬
tion with the granting to the League of Nations of a right to requisition international air
transport in the case of the application of Article 16 of the Covenant, it opens up the way for
effective reduction of these armaments.
Moreover, in the economic sphere, this measure would make it possible to co-ordinate
the efforts of the different nations, to put an end to unnecessary competition and duplication,
to reduce Government subsidies, and to improve traffic by means of a general unification.
This necessity for international co-operation has been clearly brought out by the work
done in the last twelve years in the sphere of public and private law and by the experience
of the various competent international bodies, such as the C.I.N.A.,1 the C.I.T.E.J.A.2 or
associations of big European air companies like the I.A.T.A.3
The same necessity was also brought out by the conferences held in 1931 at Prague by
various European postal administrations, and at Geneva by the Air Transport Co-operation
Committee for the study of a rational European^system.
1 C.I.N.A. — Commission Internationale de Navigation Aerienne (International Commission for Air
Navigation).
2 C.I.T.E.J.A. — Comity International Technique d’Experts Juridiques Aeriens.
3 I.A.T.A. — International Air Traffic Association.
Series of League of Nations Publications
S. d. N. 3.330 (F.). 2.475 (A.). 4/32. Imp. du J. de G.
IX. DISARMAMENT
1932. IX. 42.
T