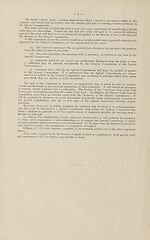 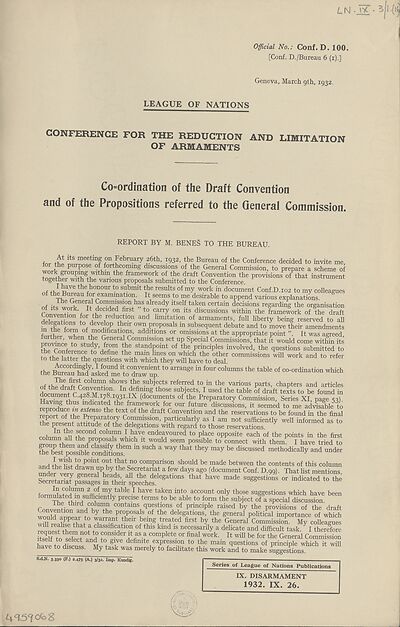 Official No.: Conf. D. 100.
[Conf. D./Bureau 6 (i).]
Geneva, March 9th, 1932.
LEAGUE OF NATIONS
CONFERENCE FOR THE REDUCTION AND LIMITATION
OF ARMAMENTS
Co-ordination of the Draft Convention
and of the Propositions referred to the General Commission.
REPORT BY M. BENES TO THE BUREAU.
At its meeting on February 26th, 1932, the Bureau of the Conference decided to invite me
for the purpose of forthcoming discussions of the General Commission, to prepare a scheme of
roeeft?r0wtthSthWe " 6 framew,ork °f the ^aft Convention the provisions of that instrument
together with the various proposals submitted to the Conference
1 have the honour to submit the results of my work in document Conf.D.102 to my colleagues
of the Bureau for examination It seems to me desirable to append various explanations. §
Ihe General Commission has already itself taken certain decisions regarding the organisation
Conven'Zn'f ®.rst " to, can7 on its discussions within the framework of the draft
nvention for the reduction and limitation of armaments, full liberty being reserved to all
fn the fofm ‘of devf.“p ‘helr own Proposals in subsequent debate and to move their amendments
m the form of modifications, additions or omissions at the appropriate point It was agreed
Drovinre'hW ^ ^neral Co™ssion set up Special Commissions, that it would come within its
the Con Wnrp f y,r|frfi0m ^ standPomt of tde principles involved, the questions submitted to
to tbCpT/iTp 1 def-ne thlinai1n-1lne^ °n Whlch the other commissions will work and to refer
to the latter the questions with which they will have to deal.
^ccordlngJy' 1 found if convenient to arrange in four columns the table of co-ordination which
the Bureau had asked me to draw up.
nf ^Sr CoIunln sho7S subiects referred to in the various parts, chapters and articles
of the draft Convention. In defining those subjects, I used the table of draft texts to be found in
document C.428 M. 178.1931 IX (documents of the Preparatory Commission, Series XI, page 53)
Having thus indicated the framework for our future discussions, it seemed to me advisable to
reproduce m extenso the text of the draft Convention and the reservations to be found in the final
the°nre?ent nt^f ^T™851011' Particularly as I am not sufficiently well informed as to
the present attitude of the delegations with regard to those reservations
CK SSfeSfaSoS" " ■ w‘y ,l” *1’y “V b' a""a .nd«r
. IriS. P°int ^ tkatno comparison should be made between the contents of this column
and the list drawn up by the Secretariat a few days ago (document Conf. D.99). That list mentions
Setretari^nfsf he^’ ^ tht delegations tha‘ have made suggesting or indicated to the
Secretariat passages in their speeches.
In column 2 of my table I have taken into account only those suggestions which have been
formulated m sufficiently precise terms to be able to form the subject of a special discussion.
the third column contains questions of principle raised by the provisions of the draft
Convention and by the proposals of the delegations, the general political importance of which
would appear to warrant their being treated first by the General Commission. My collelgues
will realise that a classification of this kind is necessarily a delicate and difficult task ^ I therefore
hsehto seefoctn0and° COmplete or final work. It will be for the General Commission
itself to select and to give definite expression to the main questions of principle which it will
have to discuss. My task was merely to facilitate this work and to make suggestions
S.d.N. 3.330 (F.) 2.475 (A.) 3/32. Imp. Kuadig.
Series of League of Nations Publications
IX. DISARMAMENT
1932. IX. 26.